MAP17: Assimilation is the seventeenth map of the Newdoom Community Project. It was designed by Trevor Primmett (iori). 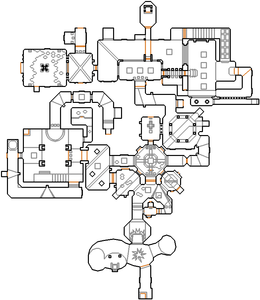 Map of Assimilation
Letters in italics refer to marked spots on the map. Sector, thing, and linedef numbers in boldface are secrets which count toward the end-of-level tally.

Press the switch behind you then open the door behind it. Turn right here and enter the wooden door. In the next room take the lift down to a water-filled chamber. There are several enemies in this room, including demons that emerge from the north once you step foot in the water. Climb the stairs to the south and go up to the door. It will open for you. The satyr switch here does nothing so ignore it and go to the end of the hallway. Press the switch here and grab the super shotgun, bars north of where the demons ambushed you will open when you obtain it. Go down the watery passage and flip the switch at the end here, opening up several doors. Watch out for the chaingunners, and then head back up the lift out of the water chamber to find that the metal wall has opened revealing revenants and a plasma gun. This room connects back to the starting point. From there, go back through the southern door and turn left this time. A new room is open with a chaingunner and another switch, this one opens bars to the southeast. Go down this hall and hit the next switch to open the nearby door, then head through this door and down the hole. Fight your way to the teleporter to the south, which takes you back to the starting point but also opens up the eastern passage with imps.

Follow the hall, going up the lift into the next big metal area. Take the door in front of you and drop into the sewage, then go left into the next door. Ignore the next door in front of you and press the switch on your left to lower bars behind you. The door behind those bars leads to yet another switch which raises bars next to you. Now go back into the sewage and take the northeast path ending up in a room just right of where you entered this area. The red keycard lies in this room and to get it, take the western door, and there should be an opening to your left. Drop into the sewage here and go through the tunnel till another switch. Hit this one to lower the lift and go through it to the other side where the next lift will ride you up to the red key. When you grab the key and try to head back though, the entrance to this area will be blocked off, but the northern door now has a bridge connecting to the other side. Go through this passage to a teleporter. You will end up back in the first water-filled chamber below the ground. Again, you are barred off from taking the lift, but the door just to the left of that is open. Go through and flip the switch here to raise some blocks in front of you. Now go back through the teleporter into the sewage system and drop down to your right. Enter the door and take the next door in front of you with an outside area containing cacodemons. If you pressed the switch earlier, there will be a few more hexagonal platforms for you to make it to the switch at the end. This switch allows you to leave the area. You can quickly head back to the area entrance by using the teleporter in the nukage. Press the switch to lower the lift and head east to the red switch, opening up another switch. Now go back to the starting point to find the barricade blocking the exit door is now gone. In the exit room, watch out for the pop-up cacodemon.

* The vertex count without the effect of node building is 2261.