MAP17: Bloodbath is the seventeenth level of Icarus: Alien Vanguard set somewhere on Beta Pictoris 3. It was designed by Mike Marcotte, and uses the music track "Slow Evil II" by Tom Mustaine. 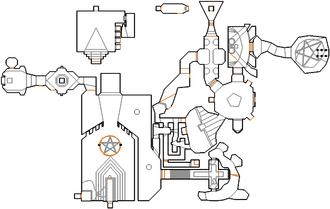 Map of Bloodbath
Letters in italics refer to marked spots on the map. Sector numbers in boldface are secrets which count toward the end-of-level tally.

Kill the imps and demon at the start and when you proceed, some walls will lower in front and to the left. The left one has a switch, hit it to lower another wall. Do this two more times, then jump through the faceted wall to teleport. Here, kill the imps and flip the switch to ride downward, then go around the blood fountain to reach a large hall. Head for the lighted portion of the hall, and take the steps up to a chaingun. After grabbing it, the wall behind you reveals a pentagram with a baron of Hell on top. Just behind where he was at, the wall there is open with several monsters and the yellow skull key. Grab it and head down the hall to the southeast to find the yellow door. Open it and climb the stairs that form. At the top are some Hell knights and a baron of Hell. Approach the dead body that the baron of Hell was in front of, and the other two walls in the chamber will lower revealing a blood-filled passage. In this passage, look out for cacodemons as you grab the rocket launcher, then return to the previous room, where the wall you previously approached has been lowered revealing the red skull key. Pick it up and head back to the dark hallway, heading north to the wooden passage. From the torch, go left, and then right at the next fork towards the lit area with the stairs. Climb them up into the next room. Open the red door to the northwest. In the next hall, approach the faceted wall to lower it as well as the walls in the hallway revealing monsters behind you. Open the exit door and teleport, then press the furthest panel on the right to exit to the ship.