MAP17: Compound is the seventeenth map of The Plutonia Experiment. It was designed by Dario Casali and uses the music track "At Doom's Gate", which is the same as for the very first level of the Doom series, E1M1: Hangar. 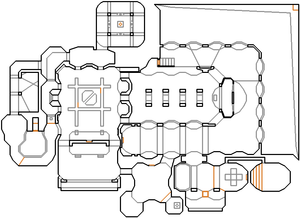 Map of Compound
Letters in italics refer to marked spots on the map. Sector, thing, and linedef numbers in boldface are secrets which count toward the end-of-level tally.

Enter the nukage and flip the switch on your right to fill the pool; you will lose some health. Head west through a short tunnel and climb the steps on your right to a ledge with three imps who are guarding a super shotgun and a radiation shielding suit. Take the suit then head north through a low doorway to an outdoor area with a #-shaped walkway. As soon as you walk under the doorway, step on the tan ledge next to you and flip the switch in the south wall, which will open three windows containing barrels in the east wall - you will need to go through these later. Get on the walkway and run north across it to reach a hallway on the north side, head west past a Hell knight guarding a rocket launcher then south through a chamber with some blue firesticks to confront some more knights. Push past them and go round the next corner to find the red skull key, but watch out for a trap containing shotgun guys and chaingunners behind you, as well as a mancubus on Hurt Me Plenty (HMP) skill level or higher.

Go back to the area with the #-shaped walkway and go through any of the doorways containing barrels that you lowered earlier (destroying the barrels first). The next area has four metal arches with more barrels between them - destroy these barrels before you continue or they will block your route to the yellow skull key later. Walk north on to a ledge and open the red key door on the west side, then go up the steps and head east, south and west past some chaingunners until you see an arachnotron guarding a button that requires the yellow key. Just before you reach this button you will see a doorway on your left leading to a room with shotgun guys; after killing them, approach the button in the neighboring room to the east to trigger an ambush by a crowd of imps, as well as a baron of Hell on HMP and an arch-vile on Ultra-Violence and Nightmare. Press the button in the east room then return to the large corridor and head round to the east side where two doors have opened, allowing you to run through the metal arches and collect the yellow key inside the final arch.

Go back through the red key door and follow the corridor round again. Return to the button that the arachnotron was guarding and press it, then return to the area with the #-shaped walkway and run across this to get to the north hallway again. Go north-east from here into a new room, where four yellow skull bars have opened allowing you to reach the exit teleporter.

Upon acquiring the rocket launcher (or if you already have one), you can perform a death slide in the exit room by killing yourself with a rocket while running backwards toward one of the yellow skull bars, causing you to pass underneath them and onto the teleporter, ending the level. This was first demonstrated in Vincent Catalaá's 00:09 NM speed run of this level.