Unchecked
This level occupies the map slot MAP17. For other maps which occupy this slot, see Category:MAP17.

Map17: Contraband is the seventeenth map of Project Einherjar, designed by Impie in 2016 and constructed in Doom Builder 2. 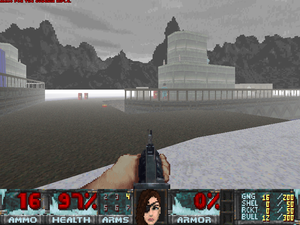 One of several freighters docked at the piers of Fjord.

A perimeter sweep should be the foremost thing on your schedule: sweep through the shipyard and take out any enemies you find. Once the outdoor area is safe, move to the building at the center of the harbor and go up the stairs to interrupt a meeting between a Thane and several Valkyrie officers. The Thane carries the yellow key required to enter the office block on the warehouse's upper levels. You can also clear out the small einherjar lab next door for a few extra goodies.

The office block contains valuable equipment behind locked doors, and several nasty ambushes. Your tour of this area ends full-circle with the blue key in your possession. Use it to grab the items in the armory before you leave.

Back at the warehouse catwalk there are two more blue doors: one guards a switch that opens the warehouse doors...and a nearby trailer containing several Jotun einherjar troops, which run amok in the shipyard. Beware the monsters you have also just released from the warehouse, since they can easily sneak up on you while you deal with the einherjar. Climb the crates to reach the red key, which opens the exit door.