MAP17: Crater is the seventeenth level of PlayStation Final Doom and is the fourth level of the TNT episode. It is based on the PC version of MAP12: Crater (originally designed by Jim Lowell for TNT: Evilution) as an adaptation with colored lighting applied and simplifications done to level geometry and texture set. Changes for the PlayStation port were authored by Tim Heydelaar.[1] It uses the music track "Mind Massacre". 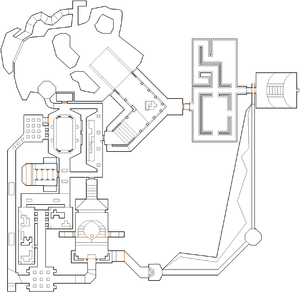 Map of Crater
Letters in italics refer to marked spots on the map. Sector, thing, and linedef numbers in boldface are secrets which count toward the end-of-level tally.

Head through the door and go straight through the large room in front of you. You will see a door on your right flanked by tall floor lamps - go through it and take the blue keycard from this room. Approaching the key will release an arachnotron on Hurt Me Plenty and Ultra Violence (HMP/UV) skill levels, or a shotgun guy on I am a Wimp/Not Too Rough (IAAW/NTR).

Leave the room and go due east, then north until you find the blue door flanked by tall floor lamps. Go through it and head down the staircase, and collect the rocket launcher from on top of the crates before following the passage to the crater area.

As soon as you reach the crater, head straight forward and you will see a gap in the wall on your right. Go in here and turn left, then climb up a staircase. At the top, kill the shotgun guys (one on IAAW/NTR, or three on HMP/UV) and take the red keycard they were guarding.

The red door is due east of the crates you passed earlier with the rocket launcher; you can reach it by going back to the blue door and following a walkway just to the south. After going through the red door, press the switch on your right and the floor will lower, taking you to a small maze - turn left, then turn right and go straight ahead to a silver and blue wall. Press use on this wall to lower it and reveal the exit room - kill the two arachnotrons (or three on HMP/UV), then climb the staircase and press the switch ahead of you to finish the level.

Portions of the large room south of the starting area can be seen through the small square openings in the ceiling west of this room. This is caused by the sky textures applied to those openings being too low, causing the rendering engine to draw parts of the previous room first.

* The vertex count without the effect of node building is 1250.