MAP17: Cyber Machine is the seventeenth map of Kama Sutra. It was designed by Adolf Vojta and uses the music track "Goin' Down the Fast Way" from Rise of the Triad (and, among the number of those reused from inspirational Hell Revealed megawad, the track from MAP13), originally by Lee Jackson.

The map inspired by HR2 map09. But it's probably my most unique map though. It will need some patience to complete so it could be boring for somebody but I decided to let the gameplay be done this way. 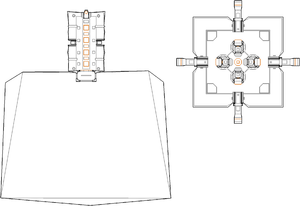 Map of Cyber Machine
Letters in italics refer to marked spots on the map. Sector numbers in boldface are secrets which count toward the end-of-level tally.

Just like the map it takes inspiration from, this is a concept level of sorts. There's not much around to look at. There is, virtually, only a boiled-down essence of Doom: slaughtering demons and not letting them slaughter you.

At the start, take some supplies you have been provided with and step onto the first pillar. From here now, timing is of the essence: if the next pillar lowers itself enough, you will be stuck. Each rectangular pillar stepped onto releases a pair of cacodemons: it's your choice whether to kill them, or to leave them be and hope to dodge their shots. There will be eight of them in total. Either way you have chosen, try to make it to the cave opening, blast past two imps and grab a megasphere before teleporting to the next area.

Here, you should quickly get an idea what to do next. Blast the four cyberdemons with the SSG in a cross pattern, as their compartments are being sequentially opened. Once they're all dead, flip the four switches in their boxes to lower a teleport in the center and prepare for the next stage.

Ignore the arch-viles for now. Grab the rocket launcher, jump down and begin to eliminate the revenants confined in the cages in the four corners of the area. If you are very proficient in dodging revenant missiles, you may choose to clear one cage at a time. Otherwise, run in a circular pattern, pumping 3-4 rockets at each cage you run across. After some time, a number of cacodemons will begin to teleport into the area. Ignore them too and concentrate on taking out the revenants. Once they're all dead, begin taking care of arch-viles and cacos.

Finally, four cyberdemons will join the fray. Grab a BFG9000 in either of their alcoves and start blasting. Keep in mind that cells are not plentiful, though. If you've been hurt, you can collect a megasphere in either of cyberdemons' alcoves, or try and grab one from either of arch-viles' pedestals. Eventually, when everyone is dead, proceed into a cyberdemon's alcove in any cardinal direction to find your exit.

* The vertex count without the effect of node building is 1443.