MAP17: Dens of Iniquity is the seventeenth map of Requiem. It was designed by Michael Rapp, and uses the music track "Tides of War" by Jeremy Doyle. The blue and yellow keys in this level change location depending on the skill level used, the latter altering the route taken to finish the level.

Dens of Iniquity. Big deal, you say to yourself as you read the sign alongside the road pointing to the area up ahead. With the sun lowering in your squinted eyes, you look ahead for signs of trouble. Your finger is reaching for the safety on your shotgun as you open the first door that you come to. You take a deep breath and step inside. The door closes swiftly behind you as you strain to see through the murky darkness. As your eyes slowly adjust you hear it, within seconds it descends upon you... 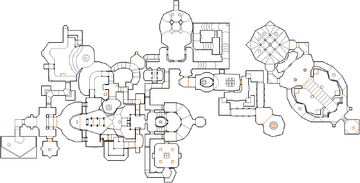 Map of Dens of Iniquity
Letters in italics refer to marked spots on the map. Sector numbers in boldface are secrets which count toward the end-of-level tally.

In the circular hallway, head through one of the doors and then head into the next room as both doors on the ends are locked.Head west in the next room with two blood walls and open the next door. Here you will find an open area, so hit the nearby switch and head down the lift to access this area. Climb the steps up to the red skull key, and go around it to find a switch that will lower it. It will also lower the wall behind you and you will be exposed to some imps.

After getting the key, head back to the building you were in by taking the lift on the right side, and then return to the blood fall room to find the one on your left is emptied out. Grab the shotgun shells here and press the wall to reveal a hallway. Follow this hallway until you reach a fork, where you should head left and around the pillar in the middle to find a switch. This raises a walkway. Now, if you are playing on Ultra-Violence or higher, then the yellow skull key will be in this area. Head out onto the walkway outside. If you are able to do it, then you can jump from the bend in the walkway to the pedestal that holds the yellow key, and then you just need to press the switch to get it. If you feel you cannot do so, then continue down the walkway following the path to the watery section that previously overlooked the red key before. In the water, go west and use the lift to head down, then take the northern door. Watch out for lost souls and pain elementals as you go through this next hallway, and enter the next room. Drop down and the yellow key should be on your right. After picking it up, you can leave this area. If you are not playing on Ultra-Violence or higher, then this whole area is entirely optional, but it could be nice to go into if you need more supplies. Now head for the red door which was close to the beginning of the level.

Behind this door, take this hallway until you find yourself in a gray room with a lot of places to go. First, go left and head through the opening with columns on it to find a switch at the top of some stairs. Hit it, then go all the way to the east in this area up some stairs. You will then have to press several switches in tandem to raise steps up till you reach the top where a green button is. If you are playing on Hurt Me Plenty or higher, the blue skull key will be right here, however, if you are playing on Hey, Not Too Rough or lower, hit this button and take the teleporter to the northeast in this area to teleport to the northern room in the big gray area. The blue key will be to the north in that case. After picking it up, if you do not have the yellow key yet, then go for the ledge just south of the northern room and lower it. In the next room, head all the way east, through the next few doors. There is a switch on the bend of this room which lowers three elevators. Take either side one, as the one just behind the switch is a dead end (although it does have a few supplies). Take the next hallway with blue torches until you reach a column of water. The yellow skull key will appear here if you are playing on Hurt Me Plenty or lower, otherwise it is a soul sphere. Regardless, approaching the column of water lowers it revealing lost souls and a teleporter back to the northern room in the big gray area.

When you have every key in the map, go back to the beginning and find the blue door, it should be opposite of the red door. Follow this hallway, and when you approach the damaging floor it will rise up for you to keep going. At the room, press the switch to reveal four teleporters. Take any one of them to reach the exit room. Since the exit is not available yet, find a switch on one of the side columns to lower a lift going down. From there, find a gargoyle switch that is not lit and press it. Quickly run to the big outdoor area with columns and head for the metal walls. They should raise you up to a raised area with imps and a yellow switch. Press it to reveal another switch which will reveal the exit. To go back, just take the route from where you came from (or the other one, and ride the lift back up. Then press the switch to leave the map.

If you want the super shotgun at the beginning, get it by heading east from the second room into a roundish room and opening the west wall.

* The vertex count without the effect of node building is 2247.