MAP17: Fortress of Blood is the seventeenth map of Simplicity. It was designed by Melissa McGee (Agent Spork) and uses the music track "Death's Bells", originally created by L.A. Sieben for TNT: Evilution. The par time defined in MAPINFO is 3:15. 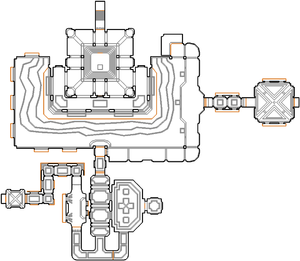 Map of Fortress of Blood
Letters in italics refer to marked spots on the map. Sector, thing, and linedef numbers in boldface are secrets which count toward the end-of-level tally.

Take the super shotgun then press the lion switch in front of you - the walls around you will lower to form staircases leading up to some imps and demons (or revenants on Ultra-Violence and Nightmare skill levels). Press another lion switch at the south end of the room to lower the walls on either side and reveal more imps and demons, then collect the rocket launcher and megaarmor in the nearby blood pools before going down some steps to a courtyard where imps, nightmare demons, hectebi and a cacodemon will fade in. Activate the lift at the south end and kill a nightmare demon waiting behind it, then open the door it was guarding to enter a marble corridor with imps and Hell knights. Head forward to a T-junction and kill the nightmare demons waiting around both corners, then take the east path which leads to a wooden room with two knights. Pressing the lion switch on the east wall will reveal four nightmare demons guarding a plasma gun, but will also open some bars nearby.

Go back to the T-junction and take the west path this time - you will come to a marble room where a number of imps will fade in. Follow the path to a skull door and open it to find a lion switch guarded by a cacodemon, press the switch to open a teleporter then step through to return to the starting point where two nightmare demons will spawn. Go back to the courtyard and activate the lift at the south end again, but this time ride it up to get on top of the wall running around the east side of the courtyard where imps and demons will fade in. Fight your way round to the east side and open the door here to find a knight protecting the red skull key; when you take the key you will drop into a small room containing a hectebus and a couple of imps. Kill the hectebus to reveal a teleporter in the east wall and enter it to go back to the starting point, walk straight forward to a lion switch and press it to lower some red bars then enter the tunnel in front of you to finish the level.

* The vertex count without the effect of node building is 2356.