MAP17: Grim Keep is the seventeenth map of 2048 Unleashed. It was designed by Captain Toenail and uses the music track "1499AD" by Paul Corfiatis. 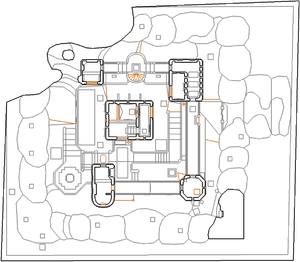 Map of Grim Keep
Letters in italics refer to marked spots on the map. Sector, thing, and linedef numbers in boldface are secrets which count toward the end-of-level tally.

Take the shotgun, armor and radiation shielding suit around you then follow the path north, watching out for demons and imps that teleport in. Head west across some nukage into a cavern, passing imps and Hell knights on the way, then turn left to confront some imps and a mancubus guarding a staircase (the wood block with the mancubus will lower as you approach). Grab the super shotgun and backpack at the top of the steps then turn left and climb up two more sets of steps guarded by a chaingunner to enter the keep.

There are four chain switches inside the keep that need to be pulled to open the path to the yellow skull key.

After pulling the final chain, a door will open to the south. Shoot the satyr switch you can see through the door to raise a small bridge then go through the door and turn left to get on the outer wall of the keep. Head forward until a door opens in front of you to reveal two revenants, kill them then step on the silver pressure pad in their chamber to open another door leading to the east wall. Head along the east wall and pass three crushers then go round the corner and climb the steps ahead to reach the yellow skull key. The pillar next to the key will lower to reveal a rocket launcher - use it to kill two revenants that teleport in below as well as imps that appear on the outer edges of the level.

Head west through a doorway that has opened and go through the yellow key door to return to the center of the keep. Kill or avoid the barons of Hell that teleport in then head round to the top of the staircase (near chain #3) and open the yellow key door here to confront two revenants. Go through the door and turn left to kill an arch-vile that rises from the floor then follow the red floor down some steps to find a baron guarding a lift. Step on the lift and ride it down to a door, which will end the level when you try to open it.

A chainsaw can be found in the cavern in the north-west corner of the level, guarded by a cacodemon.

* The vertex count without the effect of node building is 2102.