MAP17: Hell Keep is a map that appears in the PlayStation, Saturn, Jaguar, 3DO, and Game Boy Advance versions of Doom. It was designed by American McGee. In spite of its title, it is not related to the original Hell Keep, being an entirely new level, though it does take its place as the first map of Inferno. In the Game Boy Advance version, its title is rendered as Hell's Keep. 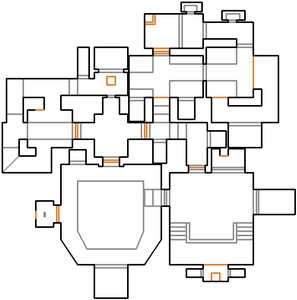 Map of Hell Keep
Letters in italics refer to marked spots on the map. Sector, thing, and linedef numbers in boldface are secrets which count toward the end-of-level tally.

Ammunition is very scarce in this map, and there are no chainsaws or berserk packs. Attempting to play this level from a pistol start will require monster infighting wherever possible. As many enemy groups consist of monsters of a single type—such as imps or demons that do not attack their fellow creatures—causing infighting can be challenging at times.

In the starting area, take the shotgun behind a tree on your left. Open the door to the north, to a room which is a fork. In front of you is a glimpse of a red keycard. Turn left and open the door. Two groups of imps will appear in the next room, and you can see a switch on the right side. Go forth and turn right, walk upstairs and turn right again. Press the aforementioned switch. The red key is now accessible. Go to the lowered pedestal with that key. Carefully take it preparing yourself for two ambushes. Dispatch the enemies and return to the fork room from where you glimpsed the key.

Take the third door. Turn left and descend to a lava hall. You see the red door ahead but first turn right and, bewaring a demon ambush, head to the zombiemen. Kill them and spare the barrels. Return to the red door and enter the teleporter. On the top of the ledge of dead zombies, head left to another ambush. Lure the given enemies closer to the spared barrels, drop off the ledge and blow them up. This will kill the enemies or at least injure them severely. Reuse the teleporter again to get back to the ledge. Head left and around. Take the blue keycard.

Leave the lava hall. Walk upstairs and turn left to a blue door. This will lead you to the southeast. Use a staircase. Prepare yourself for the hellspawn and take the yellow card. Several traps on the level will open. Dispatch the enemies. Enter the northern hellspawn trap and press the skull switch. This will open the door to the west. Go there and you will find yourself at the starting area. Dispatch more hellspawn here and take the yellow door. Press the switch to finish.

When you get the blue keycard, drop down the ledge on which it resided. Get back to the starting area. A wall that concealed a plasma gun and energy cell pack is open.

In the lava room with the cross-shaped bridge, a chaingun can be found in the south-west alcove. It is guarded by a demon on all skill levels, and a cacodemon on Hurt Me Plenty and Ultra Violence.

The PlayStation version uses the animated fire sky seen in other Hell levels. The 3DO and GBA versions use the red sky and mountains seen in Deimos levels, even though this level is set in Hell.

The PlayStation and Saturn ports add a revenant in the north-eastern room with the teleporter on Ultra Violence.

* The vertex count without the effect of node building is 380.