MAP17: House of Thorn is the seventeenth level of Memento Mori. It was designed by Eric Sambach, and uses the music track "Dreadnaught" by Mark Klem. 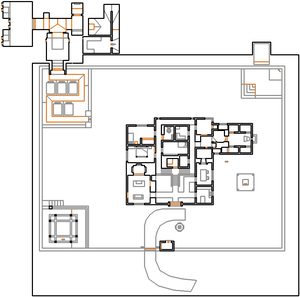 Map of House of Thorn
Letters in italics refer to marked spots on the map. Sector, thing, and linedef numbers in boldface are secrets which count toward the end-of-level tally.

From where you begin, walk forward and open the metal-plated wall in front of you. Clear out the two shotgun guys in this room, then find the skull switch in the shadowed corner ahead. Flip it, and a platform will lower ahead (with a former human or two). Ride the platform up to a "house", with numerous rooms filled with "furniture". Clear out the rooms - they contain minimal opposition (mostly former humans, and at worst, a Hell knight). Remember the location of the room with a double bed (southwest side of the house) - it contains a switch that will need to be flipped later.

Once the rooms are cleared out, head down the T-shaped stairs in the south and follow the red floor west into a "library". Kill the shotgun guy and Hell knight inside, then grab the blue key.

Return to the room with a double bed, and notice a switch right next to the door. Flip the switch, and a concealed door in the middle of the T-shaped stairs will open. Run to the new alcove, which contains a teleporter (on Hurt me plenty and below, there is also a plasma gun that will come in handy). Step into the teleporter.

You are now in a stone hallway. Kill the chaingunner in front of you (if any). Equip your plasma gun, then follow the tunnel around, clearing out a revenant, followed by another revenant (on Hurt me plenty and below) or an arch-vile (Ultra-Violence and above) at the bend. Midway through this tunnel, a teleport trap will be activated. Monsters will teleport in front and behind you (as well as into the yellow key alcove), wedging you between:

The yellow key is in an alcove blocked by a blue bar. Open the blue bar and take out any monsters that teleported inside. Grab the yellow key from the back of the alcove, then backtrack to the teleporter.

Outside, Red Key and Exit

Proceed to the northeast corner and climb the steps. When you cross onto the green ground on top, immediately face backwards and equip the chaingun, as a teleport trap will activate and drop some shotgun guys and imps behind you. If you're counting kills, there are five (Hey, not too rough and below), nine (Hurt me plenty) or 12 (Ultra-Violence and above) monsters that will teleport in. Collect the ammo and flip the switch to raise stairs in the southwest corner.

Proceed to the southwest corner and go up the steps. The structure looks seemingly innocuous, but will open up without warning. To open up the structure, walk from the stairs towards the two bulk cells. Up to four mancubi will be revealed. You might want to get out of that area before you get boxed in by these large monsters. Once the area is clear, flip the switch hidden within the structure to lower a bar in the northwest.

Head to the northwest, where you can see a graveyard. Step up onto a brown path. If you stay on this brown path until you reach the yellow door ahead, you can stay safe. However, if you stray from the brown path, monsters will rise out of the graves, but you can get a rocket launcher and some ammo. It is strongly suggested to trigger this trap first, or you might find yourself in a tight squeeze when you face the monsters behind the yellow door at the end of the path. Whatever you do, head for the yellow door.

Open the yellow door. Kill the chaingunners, revenant or arch-vile ahead. Look for the switches in the far corners of the room, and flip one to activates its corresponding lift. Ride either lift down.

In this stone tunnel, you do not need to enter the room beyond the steel panels unless you want 100% kills, or wish to get the megaspheres. Instead, go east and kill the two imps (Hey, not too rough and below) or Hell knight (Hurt me plenty and above). At the end of this corridor, the red key is in an alcove guarded by a baron of Hell (Hey, not too rough and below), two Hell knights (Hurt me plenty) or two barons of Hell (Ultra-Violence and above). Keep them in the alcove by not lowering the wooden panel keeping them in, making their plasma easier to dodge.

Once they are dead, lower the wooden panel, but turn around, equip the plasma gun and walk backwards into the red key. This allows you to get ready for a trap that opens opposite the red key alcove, with two spectres (Hey, not too rough and below), two Hell knights (Hurt me plenty) or two barons of Hell (Ultra-Violence and above), before the monsters inside overwhelm you.

Leave the alcove by lowering the wooden barrier, then ride the lifts back up to the surface. Head to the southern end of the map and find the brick structure with a red bar. Open the red bar and flip the switch inside, which opens the gate next to it. Your final opposition is a Hell knight (Hey, not too rough and below), two Hell knights (Hurt me plenty) or two barons of Hell (Ultra-Violence and above), which will come from beyond the gate.

If the gate has closed, re-open the red bars and flip the switch inside to open it again. Following the brown path, walk past the perimeter brick walls to exit the level.

The megaspheres in the dungeon at the very northwest of the map seem to be reachable on multiplayer mode only, but can be collected in single-player mode too.

Do the same procedure again mirror-inverted to get the northern megasphere.

Due to a secret being impossible to reach, you can only obtain 85% Secrets on this level.

The switch that raises the staircase in the northeast of the map can be flipped early when the elevator around it is lowered, as long as you are facing the linedef the switch is on and within activation range. Walk against the east or west sides of the platform the switch is on, and face the linedef before triggering it.

Although the intended method to obtain secret #6 is to lower the platform it is on by pressing a hidden switch, you can also take the elevators to either side of it, and strafejump onto the platform from there.

The megaspheres in the room west of the red keycard are meant to be obtained in cooperative multiplayer gameplay only, but it is possible to acquire them in single-player. To do so, flip the two front switches, press one of the first inner switches, and then run to the second platform lowered on the other side. Wait for it to raise, and then walk onto the outer edge. From there, you can walk onto the platform the megasphere rests on and obtain it. You can do so for both sides. However, because it takes up more time than is needed to finish the level, this is only used in episode and full-game runs, where it is used to obtain one megasphere in preparation for the next level.

* The vertex count without the effect of node building is 1171.