MAP17: Indiana Jones is the seventeenth map of Mock 2: The Speed of Stupid. It was designed by Dean Joseph (deathz0r) and uses the music track "The Raider's March", the main theme from the Indiana Jones films, composed by John Williams. 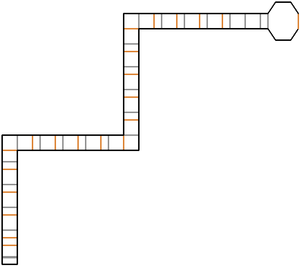 Map of Indiana Jones
Letters in italics refer to marked spots on the map. Sector, thing, and linedef numbers in boldface are secrets which count toward the end-of-level tally.

Quickly run through a series of hallways full of crushing ceilings until you reach the exit room, which is full of SS Nazis. Dispatch the enemies, and then press the button to exit the level.

* The vertex count without the effect of node building is 103.