MAP17: Lord of the Flies is the seventeenth map of 10 Sectors. It was designed by Kristian "Ebola" Käll and uses the music track " ". 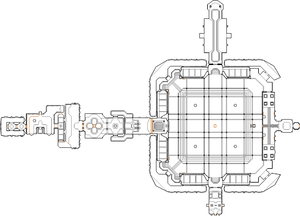 Map of Lord of the Flies
Letters in italics refer to marked spots on the map. Sector numbers in boldface are secrets which count toward the end-of-level tally.

The red key is just to the northeast, so run across the marble ledges to reach it, looking out for monsters that teleport around as you do. Go south of the key to an opening. The gargoyle switch here requires the red key, and it opens the door behind you. Go through and hop to the next ledge (do not fall off here as there is no way out). The next room has a Hell knight (baron of Hell on Ultra-Violence or higher) on a pillar with the yellow key. Kill this enemy and do a straferun to reach the yellow key. The switches at the bottom of the blood pit will teleport you out if you fall.

Return to the start and head for the door to the west. It will close as you approach it, but with the yellow key, you can still open it. Grab the plasma gun and press the gargoyle switch. This switch opens up bars behind the room where the yellow key was. Backtrack there killing the enemies that come in as you do so. Take out the arch-vile (revenant on Hey, Not Too Rough or lower) behind these bars in the next room. The next big room has a huge blood pit and several bridges traversing across it. There are also revenants and arch-viles on pillars near the center, so keep your exposure to a minimum when killing these foes. There are plenty of imps on the sides as well.

You will want to head for the gargoyle switch at the eastern end of the blood pit, so go across the bridges to reach it. This switch opens up the doors to the north and south. Go through the north first, fighting off a few enemies for the blue key (again take care not to fall off as this pit has no way out as well). Then head for the southern door, where you will find a blue switch after hopping some ledges. You will then be able to access the far eastern end of the map. Grab the rocket launcher and press the switch in prepartion for a cyberdemon which guards the exit switch.

* The vertex count without the effect of node building is 4895.