MAP17: Metastasize is the seventeenth level of Community Chest 4. It was designed by Andy Leaver and uses "Mechanical Man," a music track from Command & Conquer composed by Frank Klepacki. 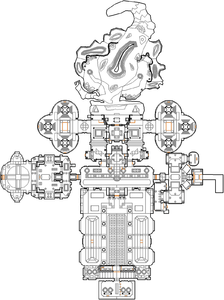 Map of Metastasize
Letters in italics refer to marked spots on the map. Sector, thing, and linedef numbers in boldface are secrets which count toward the end-of-level tally.

A level split into a red half and a blue half, Metastasize packs a good amount of stimpacks and medikits to match the good amount of health you'll be losing to about 450 monsters (on Ultra-Violence and above). While you can afford to take hits, make sure you have healing items nearby before you elect to do so.

Level progression entails collecting the red key, then the blue key before exiting.

You begin on a rock ledge in the north of an outdoor area. From the south, a good number of imps (and on Ultra-Violence and above, some demons) will approach. The caves to either side are full of zombiemen, so you might not want to go in there. Head to the left (east side) of the central orange rock wall and look for a fang-shaped grey rock. From the middle of the rock, go left (northeast) to reach a small cache with a chaingun, backpack and plenty of bullets. Now you have a weapon that can take out the cannon fodder in this area. Mow down the zombiemen and fill your backpack with the clips they drop.

Head south to an entrance to a large base. In front of the entrance are up to eight zombiemen and eight imps. As you take them out, watch for the windows high on the wall to either side of the entrance. Move too far to one side of the entrance, and you could wake up a chaingunner (not present on Hey, not too rough and below) in the opposite window. Clear them out and head through the door to find a room with four teleporters. Enter any one of them - they all head to the same location.

This might be a tad tough, because the best weapon you have is a chaingun. However, the higher the skill level, the more chances you have at initiating monster infighting to thin the horde. If you really cannot handle the monsters here, just make a dash for the door in the south wall of the hub area and head through it (which leads to the next area you are going to).

The next area is a very large hall. The red and blue keys lie on pedestals on their respective sides of the room, out of reach. You will face up to 14 Hell knights, six demons and eight chaingunners (only on Ultra-Violence and above), as well as some imps in alcoves in the northeast and northwest corners. Your first task is to make a mad dash for the southern part of the hall and grab the super shotgun there. With it (and the help of monster infighting), fill the enemies in here with buckshot. Once done, head to the southwest or southeast corners and take the steps up to the top. This leads to an overlook in the south of the hall. If you are playing on Ultra-Violence and above, you might want to quicksave now, as this next encounter is quite nasty.

Head into the overlook and approach the pair of switches in the red half. As you do so, two teleport traps activate. The first releases four spectres into the space between you and the switch. The second releases two groups of monsters into the southwest and southeast corner of the hall, which will quickly heads up the steps and box you into the overlook. Each group contains:

On Ultra-Violence and above, the Hell knights will destroy you if they close in on your position, since your weapons cannot kill them fast enough. Quickly mow down the spectres, flip both switches and make a rush to the new opening to the south of the overlook. Grab the rocket launcher and flip the switch in the red half of the room. Dump rockets towards the door, and the hordes of monsters will get themselves blown up as they approach.

Backtrack to the "hub area". Clear both alcoves in the north wall of imps first (if any). Head around the red staircase in the west to find a teleporter and take it to be teleported to the northwest alcove. As you poke your head out, you will find that the back wall of the alcove has opened, revealing a new area. Four cacodemons, three demons (on Hurt me plenty and above) and two Hell knights (on Ultra-Violence and above) will approach, and some chaingunners on a platform in the back (Hurt me plenty and above) may be alerted. You should just jump off the alcove, get on the red staircase and lob rockets as the enemies approach the alcove, which will serve as a chokepoint.

Teleport back up to the alcove and follow the path to a tall red room with red pillars. There are seven cacodemons here. Hurt me plenty adds a mancubus. Ultra-Violence (and above) adds two more mancubi, four Hell knights and eight zombiemen. Your task is to flip the switch in the left (south) and right (north) of this room, to reveal a final switch in the back (west) of the room. Flip this final switch, then backtrack to the alcove.

On the way back to the alcove, you will notice that a nearby wall has opened, releasing a cacodemon (Hey, not too rough and below), a pain elemental (Hurt me plenty) or a revenant (Ultra-Violence and above). Flip the switch in the trap, then return to the tall red room with red pillars. The central pillar has lowered, revealing a teleporter and a group of up to four imps, four Hell knights and a mancubus. Kill them and take the teleporter.

This teleports you to the ledge in the southern hall with the red key. Take the red key, As you grab it, monsters teleport into the hall - up to eight imps, six demons (Hurt me plenty and above only), three Hell knights and two barons of Hell (Ultra-Violence and above only). Just dump rockets into them until only the tougher monsters remain, which you can finish off with a super shotgun.

Head back to the "hub" area and go through the red door in the west. It leads to a loop of corridors filled with a large amount of enemies for such a narrow space - up to 28 imps, 11 chaingunners and four Hell knights - all while you have to dodge fire from more imps, shotgun guys and two arachnotrons (Ultra-Violence and above only) from the area in the middle of the loop of corridors. The suggested solution is to peek in to pull the first groups towards the red door, then head out the red door and use that area as a chokepoint to fire rockets into. Do the same with the next few groups of monsters, then deal with the monsters in the area in the middle.

Head to the west side of the loop of corridors to reach a red-floored room with a circular design on the floor. Up to five Hell knights and four cacodemons will attack here. head up the steps on either side of the room and climb them to the top. Flip the switch at the top. As you do that, two groups of up to three chaingunners and two Hell knights will teleport to either side of the room. Jump off from the switch area to the floor of the room and pull back to group them up, then use some rockets to settle the matter.

Go back to the east side of the loop of corridors. A door leading to the area in the middle is open. Flip the switch there.

Again, backtrack to the hub area. This time, head around the blue stairs to find a teleporter, which takes you to the northeast alcove. This next sequence is virtually an exact mirror image of the sequence that got you to the red key (flip two switches in the blue-pillared area, flip the switch in the back, backtrack and flip the switch in the trap, teleporter lowers in the blue-pillared area, teleport to the blue key and deal with horde of monsters). The only differences are in the monster composition:

Backtrack to the "hub area" and go through the blue door in the east. On Hurt me plenty and above, you will immediately attract the attention o two cacodemons (and two revenants on Ultra-Violence and above). Head in and pull the eight demons (and on Ultra-Violence and above, four barons of Hell) out, then subject the whole horde to a barrage of rockets. Head back in and clear the ledges in the northwest and southeast of an imp and a chaingunner (Hurt me plenty and above only). Proceed north and follow the path around to an oval chamber with a switch (watch for up to two cacodemons and a baron of Hell in here). Flip the switch inside, then head to the southwest to find that bars have opened. Two cacodemons will attack first (Hurt me plenty and above only). Head right at the fork, kill four spectres and flip the switch they were guarding. Head to the other side of the fork, kill another four spectres and flip the switch there twice.

The main part of the blue area will suddenly fill up with monsters again - up to eight shotgun guys, ten demons, four Hell knights, two revenants and a baron of Hell. A powerful monster will also teleport to the entrance of this area - a Hell knight on Hey, not too rough and below, a baron of Hell on Hurt me plenty, two arch-viles on Ultra-Violence and above. You might want to fish out the BFG9000 from secret #4 now and use it to bring the chaos to an end as soon as possible.

Next to the exit door, two chambers have opened. Flip the switch in the right one to open a switch a left one, then head into the left one and flip the newly revealed switch to open the exit door. Run into the passageway at the back to the exit chamber to automatically end the level.

* The vertex count without the effect of node building is 11104.