MAP17: Mind's Prison is the seventeenth map of Community Chest 3. It was designed by Andy Leaver and uses the music track from Descent Level 20: Oberon Iron Mine. 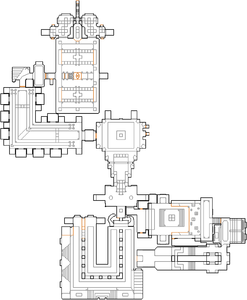 Map of Mind's Prison
Letters in italics refer to marked spots on the map. Sector, thing, and linedef numbers in boldface are secrets which count toward the end-of-level tally.

In the red key area, three linedefs trigger bars to block the exit, while the switch to remove the bars can only be activated once. Re-triggering the bars after the switch has been pressed leaves the player stuck.

* The vertex count without the effect of node building is 2619.