MAP17: Mines of Despair is the seventeenth map of Whispers of Satan. It was designed by Paul Corfiatis, who also wrote the music track for this level, "Ultra Creepy". 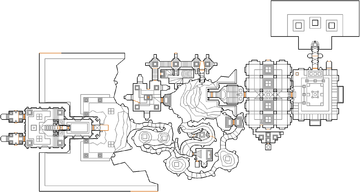 Map of Mines of Despair
Letters in italics refer to marked spots on the map. Sector, thing, and linedef numbers in boldface are secrets which count toward the end-of-level tally.

A dead shotgun guy appears in front of you with his shotgun. Grab it and flip the switch behind the desk to open the way into the cave. Follow this cave until you reach a large open area. Head towards the brown building on the right and open the door. Kill the baron of Hell and ascend the stairs to the next door. In the next big room, you need to press the switches on the north and south sides of the library to continue eastward. Open the east door and ascend the staircase up and around to the door. Open it and kill the enemies directly inside. Approach the yellow skull key and it will lower, but watch out for the Hell knights that appear from the sides. Once you get the yellow key, backtrack to the large cavern and open the yellow door that is opposite of the brown building. Inside, go around the structure containing the megasphere, watching out for imp closets which open up, and then press the gargoyle switch to open the way to the staircase. Climb upwards, watching out for revenants appearing from the walls, then press the switch at the end to open the door so you can grab the blue skull key. The blue door is just to the southeast of the brown building, so go there and follow the linear path to a fortress. Look out for the enemies that emerge outside here, then head inside. Kill the arachnotrons in front of the red exit door, then head down either staircase to find the red key atop a pillar in this next big room. Go through both of the doors here, to hit two switches in each room. After you hit four switches, a staircase will be built leading upwards to a switch, so press that switch to lower the red skull key. Head back to the red exit door and open it, looking out for the double arch-vile ambush when you attempt to exit.

About midway through the first cave, an cave is revealed revealing cacodemons. Kill them and continue through the cavern until you find an opening to the left before the water ends. Go up here to where the cacodemons were located to grab a chaingun.

* The vertex count without the effect of node building is 4203.