MAP17: Missing Gamma Sector is the seventeenth map of Unholy Realms. It was designed by Brian Knox (Snakes) and uses the music track "Magic," composed by John Weekley (PRIMEVAL). 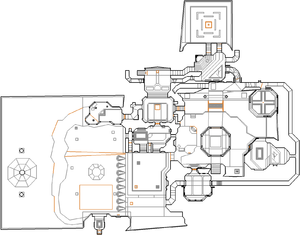 Map of Missing Gamma Sector
Letters in italics refer to marked spots on the map. Sector numbers in boldface are secrets which count toward the end-of-level tally.

Three imps, which only appear on Hurt Me Plenty or lower, do not teleport into the map. This is because their teleport destinations (things 228, 229, and 230) are flagged only for Ultra-Violence or higher. Thing 228 is also only flagged for multiplayer.

* The vertex count without the effect of node building is 3338.