MAP17: Naraka is the seventeenth map of MAYhem 2019. It was designed by rd and Nine Inch Heels, and uses the music track "Windia (Windian War March Remix)," originally composed by Yuko Takehara for Breath of Fire II. 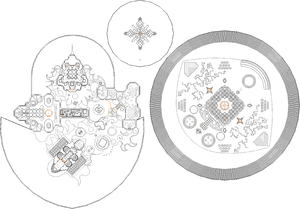 Map of Naraka
Letters in italics refer to marked spots on the map. Sector numbers in boldface are secrets which count toward the end-of-level tally.

A mummy (Thing 890) and a minotaur (946) in one of the monster caches have no flags set for any of the three difficulty classes, so they do not actually appear in the level. The same goes for two flame decorations (394 and 1092) near the player starts.

* The vertex count without the effect of node building is 19148.