MAP17: Navigating Flood Regions is the seventeenth level of the first episode of Back to Saturn X. It was designed by Sarah Mancuso (esselfortium), who also composed the level's music track, "Dirt". The par time is 2:30. In the official add-on version, this level's name is Johnwind Quesadilla. 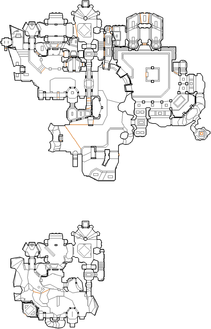 Map of Navigating Flood Regions
Letters in italics refer to marked spots on the map. Sector, thing, and linedef numbers in boldface are secrets which count toward the end-of-level tally.

Walk forward and collect a shotgun on your left, then head south up some steps to find a chaingun guarded by imps and shotgun guys. Step past the nearby low wall to find some more steps leading up to a blue key door, then continue north past this door to reach a room with more of the same enemies. Head east past some armor bonuses towards an arachnotron and kill it along with some waiting zombies, then head up the steps on the east side of the room to a covered bridge and cross it; watch out for imps and shotgun waiting on the other side, as well as one or two Hell knights that teleport in behind you and cacodemons that are released outside. Head through the next room to some more steps and kill any waiting revenants before collecting the blue keycard, then run north through the window to leap over a nukage pool and land on the ground below. (If you land in the nukage, go to the south wall to find three columns and press the metal wall under the middle column to lower a lift.)

Go back up the steps to the blue key door and open it, then head through the next hallway towards some zombies - the wall on your left will lower to reveal one or two revenants, shotgun guys, mancubi and demons. Press the arrow button at the end of the hallway to lower a lift with another demon and ride it up to the top floor, then go through the doorway in the south-east corner to find imps and a chaingunner protecting a switch - the switch will lower part of the covered bridge you crossed earlier, revealing a new area behind it. Drop down to ground level and head east into the next area, then follow the path south and west to collect a plasma gun and a megasphere; the nukage will lower and reveal a cavern to the east containing an arch-vile (or two on Ultra-Violence and Nightmare skill levels), as well as another arch-vile that teleports behind you. Enter an alcove in front of the cavern and flip the switch inside it to lower a lift by the south wall, then ride this up and run east to land on the ledge below.

Head south and east past some imps, zombies and demons to reach a switch on the east wall, which will lower the nearby barrier, then continue north to a doorway between two tech lamps and head through it. Follow the path east until you reach a megaarmor, then north to a set of steps that lead down to a large nukage pool; in the middle of the pool is a large block holding the yellow keycard and a cyberdemon, which you should kill before activating the lift on the west side of the block to get up to the key. Open the door in the north wall to go through to a room with shotgun guys, one or two knights and an arachnotron, then head to the north wall to find an arrow button; you will hear explosions nearby as you approach it. Press the button then head west into the neighboring chamber, before stepping on the red teleporter in the north-west corner.

You will be returned to the area north of the blue key, which has been heavily damaged. Head straight forward to a supercharge and kill a chaingunner hiding in a nearby window, then proceed south-west into some nukage and follow this until you step back onto dry land, where you will be assaulted by chaingunners, cacodemons, one or two mancubi, an arachnotron and an arch-vile. Drop into another nukage pool just below and run south to a doorway (three revenants are waiting behind it on Hurt Me Plenty or higher), then go up the steps to the ledge with the mancubi and follow this round to an open door with the exit switch behind it.

* The vertex count without the effect of node building is 3915.