MAP17: No One is the seventeenth level of Memento Mori II. It was designed by Michael Rapp and uses the music track "Organic Gods" (now called "Destiny") by Mark Klem. The full title of this level is No One (Ever Comes from Here).

Reports from Sector 17 have been unclear. Every scout sent in to investigate the situation has not made it back alive. It seems that no one, ever comes from here. Now it's time to send in the big boys, that means you Marine.

Your mission is to find a way to get to Sector 18. 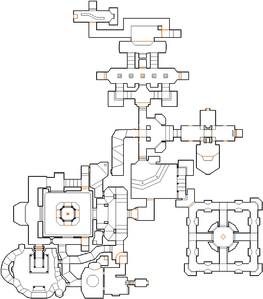 Map of No One
Letters in italics refer to marked spots on the map. Sector, thing, and linedef numbers in boldface are secrets which count toward the end-of-level tally.

This level has a rather simple layout, but its greatest challenge is the rather limited amount of health you are given relative to the number of enemies you face at once. While all three keycards are present, only the red and blue keycards are required to exit.

You begin in a grey brick tunnel. Grab the shotgun, head to its end and ride the elevator up to a large grey brick room with a long hallway in the east. Fire a shot, and you will wake up two imps and up to two demons in the hallway ahead, but your more pressing concern is the two shotgun guys behind the pillars in this room. Kill them and take their shotguns for more ammo. Go to the hallway and grab the super shotgun, then return to the large grey brick room (flipping the switches here is not required).

Next, go through the doors in the east. You will enter a grey-paneled area, with two L-shaped flights of steps leading to an upper level visible through a window. Moving forward, you will see a pillar with the blue key rise up and be greeted by a huge pack of monsters. Due to the lack of sound-blocking linedefs, a huge horde of monsters from areas further up will also begin heading for you soon. In total, you face:

Once the coast is clear, head up the steps into a hall with five raised pillars, with the center one holding the blue key. Check the two alcoves in the south for two shotgun guys in ambush positions. Take either doorway and go up the steps further north into a corridor with two tech pillars (watch for an imp in ambush on either side). Further north will be a room with square grey and black panels and a raised walkway. Watch for the enemies on the raised walkway, especially the two chaingunners (not present on Hey, not too rough and below) on top. You will also be attacked by zombiemen and two spectre, so make efficient use of your super shotgun on them.

In the room with the square grey and black panels, ride the platform in the east up (watch for any imps on it). Once you get on it, face left with your shotgun or chaingun ready to kill a shotgun guy waiting to ambush you. As you step off the platform, you will awaken three imps and a baron of Hell in a corridor to the west. However, also pay attention to the area below the walkway - a computer panel south of the walkway has opened up, revealing two chaingunners. The chaingunners have to go first, then the imps, then the baron of Hell (if applicable).

Continue west along the walkway and into the corridor. You will end up in a room with two spectres and a mancubus (replaced by a chaingunner and two imps on Hey, not too rough and below). As soon as you step into that room, quickly head back east to the walkway. You will notice a panel lowering behind the platform in the east. One (Hey, not too rough and below), two (Hurt me plenty) or four (Ultra-Violence and above) cacodemons have been released. You probably should handle them first. When you are done with them, head back west to the room and flip the switch on the west wall. This causes some panels in the east to lower, revealing up to four imps and three shotgun guys.

Backtrack south to the hallway with the five pillars. All five pillars have lowered, allowing you access to the items and the blue key. Watch for a newly opened trap north of the blue key with two demons and two shotgun guys. If you enter this trap, the doors leading to this area will close for 30 seconds. Grab the blue key, and a complex set of traps will activate:

Your goal is to avoid being boxed in on all sides. Try going north, where you can take out the monster(s) that have teleported to the north and create space between you and the horde coming from the south. Once done, exit this room and return to the large grey brick room.

Open the door ahead to enter a grey rock area with steps leading down on either side. Kill the imps in here and the shotgun guy near a platform in the south (not on Hey, not too rough and below). Remember this platform - it leads to the exit. From the open area in the south, two shotgun guys and a cacodemon or two may wander in - you should deal with them now as well. Head down either flight of steps, grab the plasma gun and energy cell packs from the intermediate ledge, then jump down and head south into the open area.

This open area has a central structure with four doors and windows in the north, south and west through which a multitude of enemies can take potshots at you. Quickly head for the doorway in the northeast corner. As you enter it, check the south for up to two shotgun guys and a chaingunner on a lowering platform. Head up the stairs and mow down the cannon fodder. Near the top, you will encounter tougher opposition (two arachnotrons and a Hell knight). Continue all the way to the end of the corridor to collect the red key, but beware of the chaingunner lying in wait there and enemies beyond the window near the red key.

Backtrack to the open area and head east to the grey rock area. Head to the platform in the southeast of this area (where a shotgun guy was earlier). Equip your plasma gun and ride the platform up to the penultimate room. This room has quite a lot of opposition in a small space - up to two shotgun guys, two imps, a demon and a baron of Hell. Plasma should do the trick pretty quickly.

Head to the alcove marked "exit" in the east. Press use on the metal pillar with red crosses to open it. Open the exit door and press the switch in the exit chamber to end the level.

In the northwest of the level where the switch to re-lower the pillar containing the blue key is found, stepping onto the pad in front of the switch triggers a trap in the east to open. Enter the trap and flip the switch on the back of the thin pillar with the square panels. This opens a niche to the north with a rocket launcher and five rockets.

A heavy weapon dude (Thing 551) in the north-west has no flags set for any of the three difficulty classes, so it does not actually appear in the level.

* The vertex count without the effect of node building is 1365.