MAP17: None So Vile is the seventeenth map in the DMP2013L.wad mapset of the Doomworld Mega Project 2013. It was designed by James Caldwell (Obsidian), and uses the music track originally from MAP31 of Hacx.

Different from a regular Doom level, the map first has the player solve several puzzles with no combat, then unleashes a number of arch-viles that the player must kill or evade on his way back to the exit. It is set in some sort of an ancient temple of green marble, with climbable vines on the walls. The only weapon that can be found on the map is the BFG9000, one being hidden in each of the secret areas. 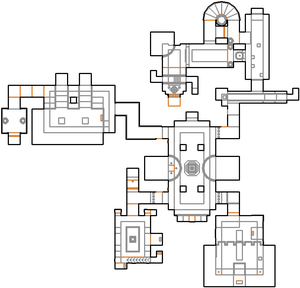 Map of None So Vile
Letters in italics refer to marked spots on the map. Sector numbers in boldface are secrets which count toward the end-of-level tally.

Get onto the ledge by climbing the vines (by walking up against the wall as if you walked up stairs) and approach the blue key. A door will open; head down the winding stairs, past the crushers, and press the skull key to lower the lift. Jump down into the central hub.

Use the skull switch to the north-west and go down the lift. Head down the ledge, quickly running past the lava; be careful about the crushers that will trigger near the end of the passage. Press the skull switch at the end, then leave the same way and get back to the central hub.

Now the next part of the level is accessible. Press the south-western skull switch in the hub, then head down. Approach the southern wall to lower a part of the floor. Enter the hole, press the skull switch and get back on the floor section before it rises (you need to press the switch right before leaving the hole). The switch will temporarily reveal another hole to the east of the room; enter and press the switch inside. Leave back into the room, and you will see a set of stairs has appeared, leading to the final skull switch here. Press it, then head back to the hub.

Now you can access the final part. Head down the south-eastern passage, climbing the vines on the way, and open the wall at the end. In the next room, you need to catch onto the vines on the wall to the east of the door; to do this, stay as close to the wall as possible (if you fall off, use the other set of vines to climb up and back onto the ledge). Make your way to the skull switch which will raise an invisible bridge. Go back to the starting ledge and go across the bridge, press the final skull switch, jump out and climb the vines out of the lava. Head back to the central hub.

The blue skull key has been revealed. Picking it up will teleport a number of arch-viles into the map.

Head back to the north-western section of the hub (all other paths are barred off). Get past the crushers and press the skull switch at the end again. Now go to the north-eastern end of the hub, and make your way back to the beginning of the level. The arch-viles are unable to follow you up the winding stairway, so the ledge at the end makes for a good place to catch your breath. Jump down and very carefully approach the blue key bars; as soon as the two final arch-viles teleport in, climb back onto the ledge to avoid their attack. Once they are dead, open the bars and enter the exit.

* The vertex count without the effect of node building is 1807.