MAP17: Nuclear Horror is the seventeenth map of Plutonia 2. It was designed by Adolf Vojta (Gusta), and uses the music track "Night Run" by Stuart Rynn. The par time defined in MAPINFO is 7:00. 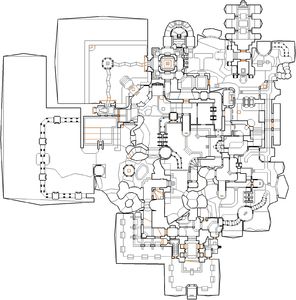 Map of Nuclear Horror
Letters in italics refer to marked spots on the map. Sector, thing, and linedef numbers in boldface are secrets which count toward the end-of-level tally.

This is a large and nonlinear level. You only need two keys to exit, red and blue. The nukage in this map does not damage you, so do not worry about it. Worry more about the amount of monsters scattered throughout the level.

From your starting point, head southeast. Once you get past the fence with the arachnotron, go south towards the door. Open it, and turn left towards the satyr switch. Press it to open it and proceed down, pressing the next satyr switch. In the nukage with arachnotrons, there is a small hut with an arch-vile, a computer area map, and a switch with red markings around it. Press this switch, and then you can access the red key. To do so, head back the way you came, but head west at the skull door. From there, head south and you should get the key.

You need to hit the red switch in the southeastern corner of the map, which is not far from where you picked up the red key. Climb the steps and press it, then head northward. Keep going north, fending off enemies as you go through the tunnel, across the path over the nukage. When the path splits in two, go left and up the steps. Go around the building through the open red door (which should be open after pressing the red switch). There will be an arch-vile and two revenants here, so kill them, then flip the switch. The figures to the sides will rise up, but so will a bridge northwest of the switch. Get out of the room the way you came in and open the left door. Look to the right to find the T-shaped bridge, and cross to the right. Open the door on the left and kill the spider mastermind guarding the blue skull key.

There are two ways to reach the blue switch which opens the way to the exit. One is southwest of the BFG9000 room. The other is northwest of the yellow key, where you can find a large group of demons. If you come through there, open the door and cross the nukage going northeast until you reach the switch. Whichever way you go to the switch, flip it, and the ways to the exit will be revealed. There are two, one is inside the BFG9000 room, and the other is southwest of the switch through the right door. Upon heading outside, there will be mancubi and a cyberdemon on the platform in the southeast. Kill them and press the lion switch to lower the final barriers to the exit.

The yellow key is not necessary to complete the level, but if you want a BFG9000, you will need to get the yellow key. From the starting point, you need to open the door behind you. To do so, head down the steps and enter the brown building. Press the skull switch to open the door, and enter before it closes. There is a rocket launcher to your left, but look out for demons when you pick it up. Straight ahead is the yellow key inside a small hut; be wary of the teleporting enemies.

To open the way to the BFG9000 in the northern part of the map, there are three yellow switches you need to press:

Alternatively, and this may be the more viable option rather than finding three skull switches, you should raise the T-shaped bridge in the north part of the map, then go left at the intersection. Take this linear path to a square-shaped hall, where the inside of this hall holds the BFG9000. Some enemies will teleport in when you pick it up, so be prepared to kill them.

At the northernmost part of the map in the crescent-shaped room, there is a flight of stairs you can take to exit the room. If you fall down the hole to the right of those stairs, you will be trapped.

* The vertex count without the effect of node building is 4993.