MAP17: Nukefall is the seventeenth map of Alien Vendetta. It was designed by Anders Johnsen and uses the music track "Into The Beast's Belly", from TNT: Evilution's MAP08: Metal. 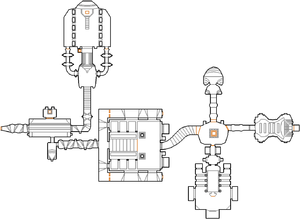 Map of Nukefall
Letters in italics refer to marked spots on the map. Sector numbers in boldface are secrets which count toward the end-of-level tally.

Nukefall is a small but quirky level. You will start out in a tricky situation as heavy weapon dudes are on both sides. The trickiest bit comes next, and it is the cyberdemon in close quarters guarding the BFG9000. The easiest way to kill him is to grab the BFG, get a good shot in, then refill on cells in the courtyard upstairs. Two barons of Hell probably woke up during the commotion, and will now be roaming around the bottom of the stairs with the cyberdemon; while these three infight finish off the cyberdemon with the BFG. The remainder of the level is relatively easy - the revenants overlooking the courtyard west of the BFG can be safely sniped through the red key pillars. From where the revenants were, head westward, then head up and drop into the nukage river. If you are not playing Ultra-Violence, there is a radiation suit on the east side of the river for you to pick up. Press the switch behind the demons and go in the other direction. Go through until you see the red key. An army of monsters reside just behind it, and the teleporter in their area leads back to the place before the nukage river. Backtrack to the red key pillars, opening both of them and pressing the switches at the end. Then, return to the BFG room. Ammo in the map is tight, so be sure to save enough cells or rockets for the ten arch-viles guarding the exit to the east.

* The vertex count without the effect of node building is 1693.