MAP17: Omega Outpost is the seventeenth map of Congestion 1024. It was designed by Lee Szymanski and uses the music track " ". 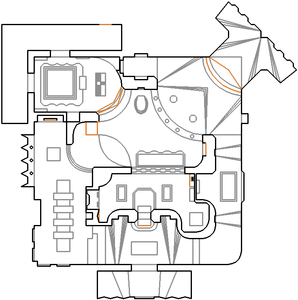 Map of Omega Outpost
Letters in italics refer to marked spots on the map. Sector numbers in boldface are secrets which count toward the end-of-level tally.

At the start, go down the corridor to find a switch. Flip it and drop down to the lower level on your right. Press the switch ahead then return to the higher level by riding the lift back up. Turn left twice and go down the stairs to your left. Use the switch to the right then return to the lower level and enter the now accessible room to the left to collect the blue key. Backtrack to the start and go through the blue door to end the level.