MAP17: Precipice is the seventeenth map of Valiant. It was designed by Paul DeBruyne (skillsaw) and uses the music track "Stealth Mode" from the Plutonia MIDI Pack, composed by James Paddock (Jimmy). The par time is 9:00. 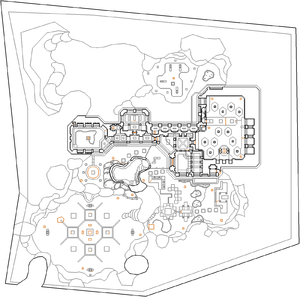 Map of Precipice
Letters in italics refer to marked spots on the map. Sector, thing, and linedef numbers in boldface are secrets which count toward the end-of-level tally.

Kill one or two shotgun guys on your left then walk south towards some barrels, killing the super imps waiting on either side. Proceed west from the barrels to a staircase and follow it down until you reach some steep steps that lead down to a circular ledge surrounding a nukage pit - the yellow keycard is on a pillar in the center of this pit. Drop into the pit and flip the switch on the west side of the pillar to lower it like a lift so you can get the key; as the pillar rises again, you will see that five imps (or chaingunners on Ultra-Violence (UV) and Nightmare (NM) skill levels) have appeared on platforms surrounding the pillar. Leap across to the circular ledge then run south-west to drop down to a teleporter that will return you to the first floor.

You will find yourself in front of a yellow key door which leads to a super shotgun, should you need it. Return to the starting point and open another yellow key door in the east wall, activate the lift behind it and kill a waiting chaingunner before riding the lift up to the second floor. Follow a trail of health bonuses in front of you round to some large platforms that you can run down to a staircase where some imps and revenants will appear. Go up to the top of the steps and collect an armor and supercharge, then arm yourself with a rapid-fire weapon before entering the teleporter in front of you; you will find yourself on a thin walkway shaped like four Xs, under attack from cacodemons as well as imps and chaingunners (as well as pyro knights on UV and NM). There are four pillars inside shallow nukage pits in the middles of the Xs - you need to flip each switch to lower the pillars and raise the nukage around them. After all four switches have been flipped, a large column in the middle of the zone will lower and allow you to get the red keycard. Kill the super mancubi that teleport in, then take the key and enter the square teleporter next to it to leave the area.

You will be back at the top of the staircase you used earlier - approach a wall that has opened ahead and kill a revenant waiting behind it, then follow the steps behind this wall to get back up to the second floor. Open the large red key door in the east wall to enter a tall chamber with imps and a mancubus, walk forward to drop down to the bottom level and turn right to kill an arachnotron. Go through the doorway it was guarding to reach a ledge, turn right again and follow the ledge to some imps then run down some square platforms to an S-shaped ledge with four teleporter pads; as you approach the pads some imps (and a demon on Hurt Me Plenty (HMP) or higher) will emerge from them. Continue south along a thin walkway until you reach a cross-shaped platform, ready to kill a super spectre on your right and a pain elemental on your left.

Walk east along another thin ledge to a narrow passage; the blocks on either side will lower to reveal imps to your left and demons and a pyro knight to your right. Continue east down some more square platforms to another ledge and turn left to kill some more imps and a chaingunner on a platform ahead, then proceed north until you hear an arch-vile (two on HMP or higher) teleport to the platform. Continue north and leap across to a ledge with two imps and a chaingunner, then activate the metal lift in the north-west corner and ride it up; be ready to kill some imps and demons waiting at the top. Head west then north past an arachnotron and mancubus to enter a room with some health and armor bonuses; the walls will lower to reveal suicide bombers and other enemies, which you should slay while you wait for the east door to open and reveal an arch-vile.

Go through the door that just opened to enter a large chamber with hexagonal platforms and crushers. Time your run east across the platforms to land on a walkway on the other side of the chamber, then head north until you see the right-hand walls lower to reveal an enclosure arachnotrons and one or two pain elementals. Enter the enclosure and walk north towards some imps and shotgun guys, then run west through some more crushers and enter a tunnel in front of you which leads to a lift. Activate the lift and ride it up to a platform with three columns then head east; as you walk past the second column they will lower to reveal imps, spectres and pyro knights. Flip the switch at the east end of the platform, then go back to the lift and throw the lever next to it so you can return to the floor below. Go back to the crushers and pass through a large archway that has opened to the north, then follow the walkway south and west to the exit teleporter.

From the start, head west to find a super chaingun and shotgun, along with a berserk pack guarded by shotgun guys, an imp and a revenant.

Before dropping down to the circular ledge surrounding the yellow key, head north into a large room with a thin walkway that leads to a rocket launcher. Taking it will lower the walkway and reveal imps, cacodemons and arachnorbs overhead.

After reaching the cross-shaped platform in the south-east area, head south onto another thin walkway that will lead you to a plasma gun.

* The vertex count without the effect of node building is 5992.