This level was also ported to PlayStation Final Doom as MAP20: Processing Area. 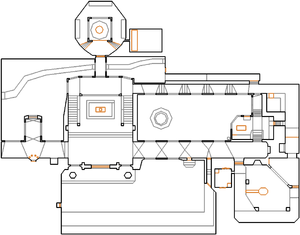 Map of Processing Area
Letters in italics refer to marked spots on the map. Sector, thing, and linedef numbers in boldface are secrets which count toward the end-of-level tally.

In the starting area, use the door ahead or use the second one on the east. Inside, go along the corridor to the east. At the end, turn left and rise on the stairs leading into a computer room, there turn left and grab the yellow keycard.

From this room, you can descend down the stairs back to the corridor and open the UAC door requiring yellow key. Or you can enter a door in the room where there was the yellow key. Then down the stairs. Turn right and go forth to a room with the second yellow door and turn right in this room and flip a switch. This will make the keycard accessible. Enter the yellow door.

You will be in the nukage room overrun by barrels, and there is the blue keycard in the middle of the room. Spare the barrels as they will help you after they will explode. Try to make other monsters here not explode the barrels now. Walk over the risen bridge and take the blue keycard. A crowd of demons will spawn here in this room. Blow up the barrels. Eliminate the rest of survived demons. Leave the room via the closest door.

Return to first wide door near the beginning of the level. Enter a wooden room north of the door. Walk upstairs and open the blue door north of the room. In the next room, walk upstairs and take the red keycard lying on the computer panel north. Be noted that a pack of monsters will spawn here.

Backtrack to the wooden room near the beginning of the level. Take the corridor west. Open the red skull bars and flip the switch to end the level.