MAP17: RB Takes Over 32in24 is the seventeenth map of 32in24-5, a deathmatch megawad. It was designed by Conor Maddin (ClonedPickle) and mid, and uses the music track "Between Levels," originally composed by Robert Prince for Doom II. 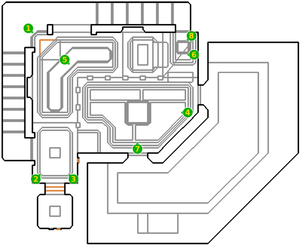 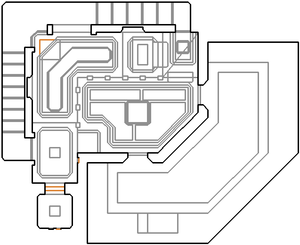 This is a very small map, with the playable area occupying an area of 1248x1440 map units with room to spare. Much of the playable area consists of a single room, whilst the J-shaped area to the south-east is inaccessible decoration.

The south-east corner of the playable area is a raised platform, where players can find the super shotgun. There are steps on the north side of the platform to access it, as well as a lift on the western side, activated by an adjacent switch. From the north-west corner of this platform, players can run across a platform with a rocket launcher to reach a hallway that wraps around the northern and western edges of the map. A megaarmor is at the point of entry to this hallway, and stairs lead up from either side, with some ammunition at each end.

Between the platform and the hallway is a nukage pool that deals 5 damage before armor, with a narrow walkway for protection. A chaingun is available at the centre of the walkway. For added protection from the nukage if required, the exit room found at the south end of the map also contains a single radiation suit.

* The vertex count without the effect of node building is 512.