MAP17: River of Blood is the eighteenth map of Hacx. It was designed by Marc Pullen (Fanatic). 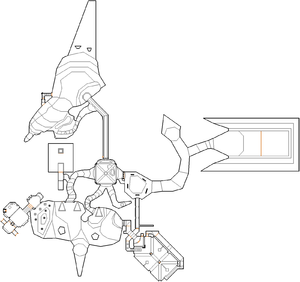 Map of River of Blood
Letters in italics refer to marked spots on the map. Sector, thing, and linedef numbers in boldface are secrets which count toward the end-of-level tally.

Walk through the waterfall in front of you then immediately turn right to see some rock steps, which lead up to a stream. Follow the stream south until you reach a gate, then shoot the broken panel on your right to reveal a switch that will open the gate and allow you to collect an uzi, which you should use to kill the thugs waiting ahead. Go to the fork at the south end of the room and take the west path (the east is a dead end) and head up the steps to a large cavern with thugs and androids, then go to the west side of this cavern to find a low metal doorway leading to an empty chamber. Enter the south-west alcove, which will close the doorway and raise some steps leading up to the room above, and kill the waiting phages at the top, then go down either set of steps on the opposite side to destroy some thugs who are guarding another broken panel. Shoot the panel as well as the button behind it to re-open the doorway that closed behind you.

Head back to the large cavern and pass through the now-open east doorway, then go round the corner to open a niche on your left containing a terminatrix and a cenotrophexine. Continue down the steps to get an enk blind, which will open the wall in front of you and reveal a large hall with two to five monstructs, then look behind the south-east column in this hall to find a broken panel and shoot it to reveal a metal panel; using this panel will reveal a button that will raise some stairs behind you, leading up to a tunnel with thugs guarding a nuker. Follow the tunnel past some molecule tanks until your path is blocked by a terminatrix, then push past it to step on a lift that leads back down to the hall. Androids will teleport in, joined by phages on "Let's rip them apart!" skill level or thorn things on "I am immortal"; after killing them, check the north-west column for another broken panel and shoot it to reveal a switch that will lower some stairs on the west side.

Go down the new staircase and follow the passage until you see the wall in front of you lower, then step past it and follow a dripping tunnel to a small cavern with a terminatrix. Go up the large east steps to get outside, then run straight forward to end the level.

As soon as the level starts, head straight forward until you drop into a pool below. Immediately turn left to find some steps leading up to a case of torpedoes; when you reach the top, a lift holding an SI array will lower that will take you back up.

After lowering the west staircase in the south-east hall, descend them and head forward until the floor in front of you lowers. When it does, ride back up then return to the large cavern and enter the water-filled tunnel on the west side. Halfway along this passage is an open gate opposite a 007Microtel - step through it and turn right until you hear a wall lower behind you, releasing one or more buzzers guarding a stick.