MAP17: Steeple of Knives is the seventeenth level of the second episode of Back to Saturn X. It was designed by Xaser Acheron, and uses the music track "Ominus" composed by him. In the official add-on version, this level's name is Nine Suggestions on How to Get the Man Out of the Box. The map takes place in the three-pronged tower visible at the end of MAP16: Tower in the Fountain of Sparks III; it is preceded by a death exit to force the player to begin from pistol start. In this short level the player must activate the three switches in the tower's three prongs, facing different hordes depending on the order in which he presses the switches, then wait for the exit to reveal itself. 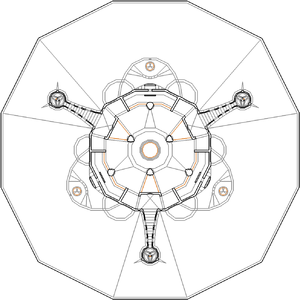 Map of Steeple of Knives
Letters in italics refer to marked spots on the map. Sector, thing, and linedef numbers in boldface are secrets which count toward the end-of-level tally.

The tower has three prongs: red, yellow and green. At the end of each is a switch which releases a number of monsters into the tower's main area (but also reveals a new weapon). After you press the switch, step onto it to teleport back to the hall.

The monsters released by the switches and the items revealed are as follows:

Once all three switches are pressed, step onto the purple liquid pool in the middle. The three skull panels to the north, south-east and south-west (hidden behind barriers) will begin to open; once they finish rising, step through any of the passages to reach the exit.