MAP17: THE END is the seventeenth map of 50 Shades of Graytall. It was designed by Michael Fraize (Marcaek). The music track is a MIDI rendition of Crazy in Love by Beyoncé. 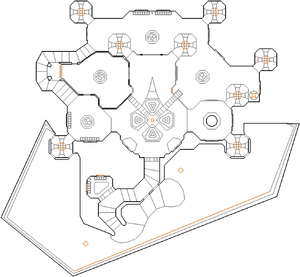 Map of THE END
Letters in italics refer to marked spots on the map. Sector numbers in boldface are secrets which count toward the end-of-level tally.

There is no real walkthrough as this is a credit map, there is no combat or puzzle.

You start on a platform with a stairway in front of you. At the end of the stairs is the entrance to the Graytall museum, with a small waiting room to the side where you can sit on the benches and read magazines while waiting for your date to show up. A scrolling title picture shows that this level breaks the texture limitation, in the name of art: in the museum, you will get to look at screenshots of the levels you have visited previously, captioned with the name of their authors.

Resume the tour of the museum and you reach the central part of the art exhibit, where you can admire a tasteful DOORTRAK column surrounded by four audacious FIREBLU pillars. Move to the screenshots on the walls, where you can admire "Jimmy", a depiction of Entrygray, and "Ezormer", a look back on Tall, Gray, and Handsome. Proceed to the east and examine, in turn, "Megalyth", a portrayal of The Gray, the Blu, and the Trakly; "Alfonzo", which takes you back to the Alfonzone; and "Ryan 'Quakis' Rouse" that captured the central tower of Concrete Flagellation. Now move to the north of the central area and bring your discerning gaze to "NoisyVelvet" and "Marcaek", two works that should evoke memories of Count Trakula's Castle and Address Unknown. This one, move to the west wing, where you can contemplate "Mouldy", a somber reminder of the horrors that awaited you At the Mountains of Madness, and "Joshy", an illustration from the Killing Fields. Climb the stairs and watch your right to enter a different part of the exhibition.

While floating in the void in that darkened room, let your feet bring you to "Mechadon", a work capturing the essence of Big Dwayne's Orbital Concrete and Propane Emporium. On the opposite side of a daring FIREBLU sculpture, you will find "Breezeep", a piece about the Stardust Mayhem. If you came with family, keep your children away from the window to the lobby, as the museum thought a railing would not fit with the aesthetics of the exhibition. Instead, leave this room and finish climbing the stairs.

Here you will find "Ribbiks", which represents the Cake Way, and you will relive the Everlasting Fireblu in front of "Shockblast4". Next to the stairway you came from, you can admire "Xaser", an attempt at conveying the enigmatic beauty of the Serpentine Lemniscate, while if you push forward, you will see "Dobu Gabu Maru" which has been known to induce Astral Nausea. Press on and you will see on your side "Timeofdeath", a portrait of Mr. Graytall in his glory days. The visit is now over.

What's that, another painting, in a distant room? What is "Argentum"? A strange artwork, suffering from Killer Color Blindness. We remind you that it is forbidden to touch works of art in this gallery. Do not try to mess with the art piece's caption, do not jump into the nearby teleporter, and do not step on the broken DOORTRAK column!

There are no official secrets on this map. However, the exit to Killer Color Blindness is hidden, as this level is intended to be a secret map.

As this level contains no monsters or secrets, all categories except UV speed are redundant.

* The vertex count without the effect of node building is 1607.