MAP17: Tenements is the seventeenth map of Doom II. It was designed by John Romero and uses the music track "The Healer Stalks". The par time is 7:00. 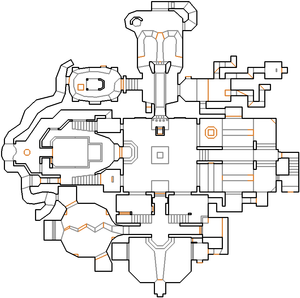 Walk across the pathway over the nukage passing through a doorway. Turn left there. If you center yourself in the corridor and aim carefully, you can run down the narrow, twisty, jagged bridge to the red keycard and pick it up. In addition, you are able to run backwards, without turning around, to make your escape before the released monsters are able to do you damage. If you do not succeed, you can still flee quickly by jumping to the blood beneath; the northeast and southwest corners have small red teleporter pads that take you back to the corridor. Although the cacodemons (on Hurt me plenty or higher) are easily avoidable, be careful as they may attack you behind your back in the adjacent areas later.

In the hallway, just outside of the entry room and the room with the red keycard, there are two rooms reached by a flight of stairs. Using the red key, enter the western one first. Press the face on the eastern wall. It will reveal a lift and a face panel in the other, eastern room.

Enter the room, push the face and ride the lift down. Deal with the nasties. Then move to the opposite corner until you reach a passageway to the right. Pressing the face panel there reveals yet another lift, which you must ride up in order to reach the eastern gallery which overlooks the entryway. A switch is in the southwest corner. Pushing it will open the door leading to the central area. Leave the area by opening the face panel behind a partition in the northwest corner and drop back to the entrance room.

Proceed to the newly accessed central area and head for the doorway to the east (the one on your right as you enter), taking a long hallway bounded by fences on either side. At the end of the hallway, there are entrances to two similar rooms, each with two platforms at either end, separated by a nukage pool in the middle. Start with the one to the north. Turn your back to the nukage, drop in and press the button in the center of the bulkhead in front of you, lowering the platform on your (the eastern) end. As soon as you can get on the platform to ride it up, press a switch halfway up the northeast corner to open the gray granite panel at the end of the hallway. You do not need to be in level with the switch when activating, just standing in front of it is enough for you to reach it.

Run from the rising platform to the panel and enter the passage it reveals. Throw the switch there, which raises a bridge in the southern room in the area. You will now enter at the end of the passageway. Quickly walk (or run) across the bridge and continue all the way to the opposite end of the room. The center of the platform at the end will lower into the nukage. Drop in and press the switch. It will raise the sunken center portion of the platform and raise a bridge in the northern room. Use the new bridge to obtain the blue keycard.

Cross the nukage pond in the central area and enter the blue door. Along the southern wall, there is a set of stairs leading up. One of the top steps is a trigger for opening a small chamber near the bottom of the stairs containing a soul sphere and, further on, a partial invisibility sphere. However, you do not have to pick up either if you do not wish yet; you just need to enter the chamber. Doing so will raise a wood panel with a skull switch in the room back at the top of the stairs. Press the switch to reveal a passage in the room opposite the current one.

Follow the passageway to a gallery which overlooks the nukage pond in the area, with one window large enough to easily pass through. Crossing the threshold of the window briefly lowers the platform at the opposite end of the pond on which the yellow skull key is located. Grab it and ride the platform up, exiting the room for the central pond and the area to the left.

The yellow door on the northern side of the wooden tower reveals a switch. Press it to lower the gate behind you. At the northern end of the room past the gate, there is a bridge shaped like a 3. Take the left (west) fork, run across the end of the bridge and enter the chamber to your right. A ramp winds up along the perimeter. Push the skull switch at the end. Head back to the room just inside the yellow gate and head to the bridge once again, this time taking the right (east) fork. Press the switch on the wall to lower a lift and ride it to the top. Another trigger at the top opens a short narrow passage. Entering it will open another passage which you must likewise enter to open yet a third. Entering the third passage opens a back wall in the first passage and so on until the exit becomes accessible.

Completing the level does require plenty of actions, and as a result, the map is explored nearly thoroughly. There, however, are a few optional areas to find. In the blood pool of the red key area, there are small white teleporters in the northwest and southeast corners. They take you to the ledges that are revealed while crossing the bridge. Do not enter the teleporters before the ledges have opened unless you are properly armored, especially on higher skill levels; the ledges can be opened from the inside but are crowded with monsters. The southern ledge holds two medikits while the northern has a single one. Use the red teleporters in the blood to proceed.

In the cavern, at the western end of the blue door area, there is a serpentine river stretching towards north and south. When you reach the northern end, you will find a backpack. If you follow the river all the way to the opposite end, you will see an opening to the northern ledge in the red key area. Beware as both ends have a pain elemental in position. On the way to the southern end, you will come to a fork to the east. By dropping down there, you can reach the partial invisibility sphere you saw earlier. The barrier behind it will lower, allowing you to exit.

The teleporter on the western fork of the yellow gate area takes you atop the pillar in the central nukage pool where a soul sphere lies.

The five spectres in the red door room are immobile and cannot attack unless the player gets too close to them. Some of the spectres can still become mobile if others surrounding them are killed.

In version 1.666 of Doom II, the teleporter pad in the lava pit that surrounds the arch-vile cage was accidentally flagged as operable in multiplayer only. As a result, falling into the lava pit in single player mode will result in being unable to escape, unless the noclip cheat is used.

A glitch allows the player to spare many seconds in the eastern section of the level. The player does not have to drop into the nukage pit to raise the bridge to the blue keycard. Instead, the wall above the switch can be pressed from the edge of the pit and, despite the considerable difference in height, the touch will count as a switch hit. Similarly, the concealed switch that opened the gray granite panel can be activated by pressing the decorative torch above it. In addition, for run classes that require all the secrets to be found, the lion-head switch (see secret #2) can be turned on by hitting the air above it. The tricks are based on the fact that linedefs can be activated regardless of player's Z position.