MAP17: The Pool of Blood is the seventeenth map of Plutonia 1024: The Plutinya Experiment. It was designed by Surreily, and the par time defined in MAPINFO is 7:00. 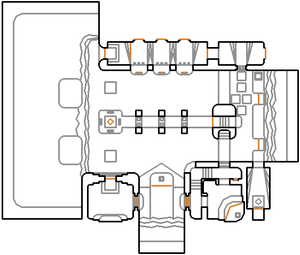 Map of The Pool of Blood
Letters in italics refer to marked spots on the map. Sector, thing, and linedef numbers in boldface are secrets which count toward the end-of-level tally.

Head straight forward to collect an armor, boxes of rockets and a rocket launcher then turn left and use your new weapon to kill the imps and Hell knights (plus revenants on Hurt Me Plenty (HMP) skill level or higher) ahead. Go back to where you found the rocket boxes and run west to land on a platform with a medikit, then go up the steps to find a chaingun before walking south to drop into the blood pool containing the enemies you just killed. Look west to kill an arachnotron that teleports in, then head to the north-west corner to find some rockets next to a lift that has a chaingunner on it which you can ride up to reach a walkway with three skull switches - you will need to use these after collecting all the keys. Take the super shotgun in front of you and use it to kill demons in front of and behind you, then step on the teleporter pad ahead to drop into a chamber where two or three spectres are guarding the yellow skull key.

Flip the switch behind the spectres to open the nearby doorway, then kill any imps and revenants that teleport in before stepping through it. Activate the lift on your left to get back to where you found the rocket launcher, then go back to the walkway with the chaingun before walking south to drop into another blood pool with more enemies. Head to the south-west corner to find a medikit in front of another lift, activate it to get a super shotgun then ride the lift up to confront two demons (or revenants on Ultra-Violence and Nightmare). Press the button on the east wall to lower it and find two knights guarding the red skull key; taking it will cause two more knights (or revenants on HMP or higher) to teleport to the center walkway. Press another button to the east to open it, then kill a waiting revenant before walking east to find the blue skull key. On HMP or higher, watch out for an arch-vile hiding in the north-west corner of the chamber.

With the blue key, kill two demons that teleport in then head back outside to the red key area and drop down to the blood below; from here you can backtrack to the lift in the north-west corner and ride it up to the three skull switches you passed earlier. Press all three switches to open the bars behind you, then flip three more switches behind those bars to open the barricades on the center walkway and clear your path to the exit teleporter - after flipping the third switch, an arch-vile (or two on HMP or higher) will teleport to the blood pool. Get back to the eastern-most ledge, then jump across to the center walkway and follow it to the exit teleporter.