MAP17: Transfer Base is the seventeenth map of Claustrophobia 1024. It was designed by Solarn, Steve Muller (Kyka) and Joonas Äijälä (Jodwin), and uses a MIDI rendition of the music track "Arctic Caverns" from Battletoads, sequenced by Teck. 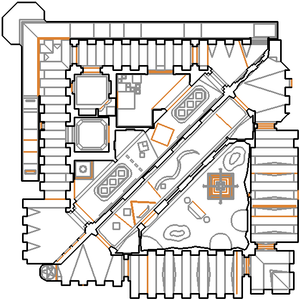 Map of Transfer Base
Letters in italics refer to marked spots on the map. Sector numbers in boldface are secrets which count toward the end-of-level tally.

At the start of the level, there is a bright, red light on the western computer panel. If you activate this part of the panel, megaarmor will appear on the shelf south of you.

* The vertex count without the effect of node building is 2111.