MAP17: Watch Your Step is the seventeenth level of Doom 64, designed by Danny Lewis. It uses the music track "Blood Red Shadows".

It begins in a large, empty arena-like area, with a sealed-off exit and a hallway. This hallway contains various weapons, including a BFG9000, and leads into a square room with an elevated area in the center. Ammo is strewn about, and the area is devoid of enemies, until the player steps on certain tiles. If the player doesn't "watch their step", they will be hopelessly swarmed with demons. The music for this level is the same as the music from PlayStation Doom which appears on MAP02: Plant, MAP14: Halls of the Damned and MAP48: Nirvana. The music resembles a sad track with strange sounds to go along with it. The level ends with a huge battle against wave after wave of demons, culminating in a battle with twin cyberdemons, provided the player is playing on Watch Me Die skill. 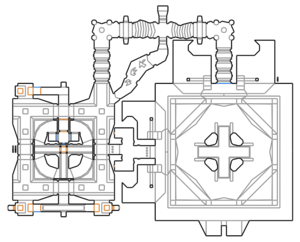 Map of Watch Your Step
Letters in italics refer to marked spots on the map. Sector and Thing numbers in boldface are secrets which count toward the end-of-level tally.

The player begins in a large open arena with a stone structure in the middle. There are no signs of monsters of any kind to be found just yet, but there are some heavy weapons set on posts along the walls. Head for the large pathway to the other section of the map, collecting a backpack and a BFG along the way.

In the other section, there is a square path lined with tiles that goes around a dense, round structure. The tiles on the path trigger the appearance of lots of monsters including pinkies, Hell knights, cacodemons, lost souls, and pain elementals. The player must traverse these tiles until he trips the one that causes the blue skull key to appear in the far corner. The key grants the player access to the inside of the round structure and after tripping all the tiles and killing all the monsters, player has to head into the structure through the mesh gate. Kill the pain elemental that is beyond the gate and continue on.

The player takes an elevator to the upper level of the structure and dispatches the imps guarding the teleporter in the center. Go into the teleporter and it takes the player to a frontage hall where he will have to kill sergeants. Player then goes across the frontage hall to the teleporter on the other side which takes him to a smaller frontage hall with a berserk powerup available which will trigger the appearance of imps, cacodemons, and pain elementals. Kill all monsters, then head back to the large open arena where the player first started.

Immediately after returning to the large open arena, many monsters will begin appearing progressively in waves as the player kills them. This starts with sergeants, and continues with imps, demons, Hell knights, mancubi and arachnotrons, and finally, the player's first encounter with the cyberdemon (two on WMD difficulty). Abundant sources of ammunition and health also appear in the corners of the arena. Once all monsters and cyberdemons are killed, gates will open giving the player access to the exit.

After you unlock access to the invincibility and mega sphere powerups, save them for the fight with the cyberdemons. With each one having 4000 HP and their rockets having the potential to kill the player instantly even with max health and armor, these will greatly increase the odds of surviving your encounter with them.

By the time you've reached this map, you should have 2 of the 3 demon artifacts (the third one is not accessible until after the secret exit is taken in MAP18: Spawned Fear). These will make the Unmaker fire dual laser streams which are fueled by your energy cell reserves. It should be significantly powerful enough to deal with the cyberdemons with little to no effort.

While using invincibility, you can also charge at the cyberdemons with your BFG and fire a point-blank shot at them, dealing massive damage. However it can take 3 to 4 shots with the BFG to kill them. Energy cell packs can be found in the corners of the arena and near where the cyberdemons appeared as you may need them to fuel the voracious appetite of the BFG.

* The vertex count without the effect of node building is 1464.