MAP17: Zumma is the seventeenth map of 1 Monster. It was designed by Mark Pedersen (Macro11_1) with edits by scwiba, and uses the song from TNT: Evilution's MAP04.

Like all maps in the megawad, the map features only one type of monster, in this case the heavy weapon dude. It is set in a sort of a marble temple built within an environment of fiery rock. 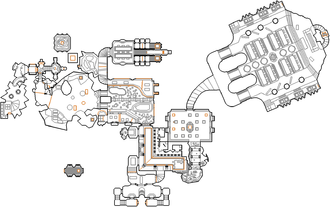 Map of Zumma
Letters in italics refer to marked spots on the map. Sector, thing, and linedef numbers in boldface are secrets which count toward the end-of-level tally.

Press the marble face and head forward. Open the wall with the pentagram. Inside, gargoyle switches will be revealed that open the doors. Proceed through the dark area, go up the stairs and press the skull switch. Go back to the starting area. Now you can open the bars that block your way outside. Proceed forward and enter the marble chamber at the end.

Climb a red ledge to the north. Proceed west; a portion of the floor will collapse beneath you as you do. If you fall in, press the metal wall to reveal a teleporter back up. To make it past the collapsed floor, walk on a ledge along the eastern wall. In the next room, head down either of the side passages, and walk through the metal bars to get the red key. Leave, go back to the large marble chamber, and open the red bars to the south, then the white bars beneath them. Enter the marble corridor.

Press the very middle of the lion switch in a small room to the north-west. Now you can walk up one of the stairways to the south. In the outside area, go up any staircase, and press (or simply approach) a lion switch at the top. This will open a cavern entrance to the south-east of the marble corridor. Head through and on forward. Be careful to keep to the marble stepping stones so that you will not get damaged by the lava. Drop down into the large lava-filled cavern. If you fall into the lava, quickly enter one of the teleporters.

There are several marble blocks in here which rise and lower regularly. You need to carefully jump from block to block in order to reach a skull switch to the north-west. The safest and simplest way is to wait until the block that you are on rises a little, and the next block rises entirely, then run forward so that you will land on the metal lip that surrounds each block, where you are safe from the lava. Once you make it to the skull switch, press it, then press the gargoyle switch underneath. This opens the bars to the north. Get there by jumping from block to block and proceed forward.

In the "church", enter both side passages and press the skull switches at the end. A wave of enemies will pour in. Eventually, two passages will open up behind the altar, which lead to the exit.

In the starting area is a translucent waterfall of blood. Behind it you will find a medikit and a super shotgun. However, picking these up will cause a heavy weapon dude to pop up in a small cage behind you.

There is a blue skull key on one of the pillars outside. It can be picked up by getting onto the highest pillar (see Secrets) and straferunning down onto the lower pillars, but it is not used for anything.

In the small outside area entered after opening the red bars, there are two lion switches that open the entrance to the red cavern. Pressing these switches is not necessary; approaching them suffices. Pressing either switch does nothing but hide the other switch.

It is possible to glide through the red key bars, and thus skip the entire red key area.

* The vertex count without the effect of node building is 7465.