MAP17 is the seventeenth and final map of 2 Sectors. It was designed by Fishjimboding.

It is an updated version of MAP10 that was submitted after the contest deadline. 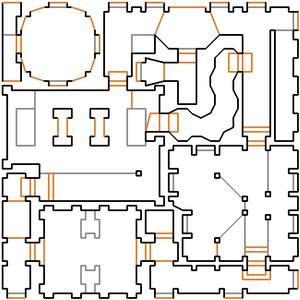 Map of MAP17
Letters in italics refer to marked spots on the map. Sector, thing, and linedef numbers in boldface are secrets which count toward the end-of-level tally.

The walkthrough for this level is almost identical MAP10. However, the invulnerability found near the end of the level appears on all skill levels.

The points of interest for this level are almost identical to MAP10, but the partial invisibility near the arch-vile is replaced with a computer area map.

The player 2, 3 and 4 starts (Things 153, 155 and 154) and the three deathmatch starts (156 through 158) have no flags set for any of the three difficulty classes, but because of special handling in the engine, they function normally in the level.