MAP18: A Dead Man's Town is the eighteenth level of Memento Mori. It was designed by Henrik Rathje, and uses the music track "Hidden Anger" by Mark Klem. Although this level was designed for cooperative multiplayer gameplay, there is an additional switch in the room after the second teleporter that makes completing the level possible in single-player. 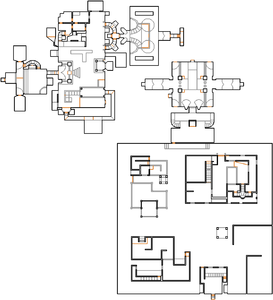 Map of A Dead Man's Town
Letters in italics refer to marked spots on the map. Sector, thing, and linedef numbers in boldface are secrets which count toward the end-of-level tally.

You begin in a small room. On co-op, players 2 and 4 spawn in the room on the other end. Gather up your weapons and ammo and head out the door. The yard in the east is teeming with monsters, including a chaingunner pillbox, a Hell knight, and on Hurt me plenty and above, an arachnotron. The corridor also has a Hell knight on Hurt me plenty and above. Once you cross the middle of the corridor, two traps will open - one on the left with up to three imps and a Hell knight, and one in the yards with two imps.

Find the door in the northeast of the corridor, and go down the staircase. Another trap will open in the north wall of the yard as you exit, with a revenant (Hey, not too rough or below) or an arch-vile (Hurt me plenty and above). Kill it and flip the switch in the trap. This opens up a staircase in the east wall of the yard. Head up this staircase.

As you reach the top, however, you are teleported to a new area.

Go up the stairs to the platform with the red key. From there, you may be able to spot an imp (Hurt me plenty and below) or an arch-vile (Ultra-Violence and above) which has been released into the north end of the open area. Snipe the monster out, then collect the red key and armor.

Drop back down to ground level and go through either red key-locked silver door in the northeast of the open area Proceed up the steps, but as soon as you hear a platform moving, watch for a chaingunner in a trap opening near you. Continue forward through the next two doors.

In this next room with two curved staircases, a Hell knight (Hey, not too rough and below) or a baron of Hell (Hurt me plenty and above) stands on the raised area ahead. On Hurt me plenty and above, watch for chaingunners on either side of the entrance as you enter. Continue up the stairs and flip the switch at the rear of the raised area to lower some walls nearby. As you walk through, walls behind you open to reveal two Hell knights (Hey, not too rough and below) or two barons of Hell (Hurt me plenty and above). There is more than enough dodging space, so they should not be too much of a problem. Find the silver wall on the back of the room and equip your plasma gun if available. As you approach it, an arch-vile lowers into the room - incinerate it before it incinerates you.

Continue forward, and you are suddenly teleported to a new area.

The next area is a switch puzzle. Due to the way the teleport lines are set up in the previous area, co-op players will alternately teleport to opposite sides of this room. The first player always ends up on the western side of the room, and the second player always ends up on the eastern side of the room. Clear the room of former humans (and on Ultra-Violence, revenants) first before completing the puzzle.

To complete this puzzle in single-player:

To complete this puzzle in co-op:

The door to the south is now open. Drop down and continue through, taking out any chaingunners and a mancubus. Go up the stairs and open the door to enter a new area

You are now in a small cluster of buildings. This area is teeming with monsters - just right for a co-op game, but quite a big number on a single-player run. As with most of these types of areas, your first order of business is to clean out the area of as many monsters as possible, so you can go about progressing the level in peace.

Once the monsters are significantly thinned out, find the southwest brick building and go up the steps. Prepare your plasma gun - as you enter, a wall lowers to block your exit, and you are ambushed by a chaingunner and on Hurt me plenty and above, two barons of Hell in a tight space. Grab the soulsphere and dump your plasma before you get boxed in. Continue forward to deal with a demon, shotgun guy and revenant, then a baron of Hell, an arachnotron and a shotgun guy around the corner. At the end of the corridor is a switch, but on Hurt me plenty and above, an arch-vile protects it. He will immediately teleport away to the monster-filled platform on the west. Flip the switch behind and jump out through the door back to ground level. Remember to kill that arch-vile before he resurrects a platform's worth of monsters!

Go to the west side of the southwest building and find a gap in the west wall. Take out another arch-vile and a cacodemon here. Find the opening, then mow down everything in the darkened staircase to reach the platform with the blue key.

Go to the blue door in the northeast of this area. Clear out the former humans ahead (on Ultra-Violence and above, be careful of a revenant waiting near the entrance). Go through the passage in the east and alert the arachnotron. As you round the corner, the wall opens, revealing two Hell knights. The arachnotron will pause to open fire, creating an opportunity for monster infighting that makes your life easier. Flip the switch behind the arachnotron.

The door in the west wall of this area is now open. Kill any barons of Hell in this room, then open the door, equip the super shotgun and go up the stairs. Give the chaingunner ahead a face full of buckshot. As you reach the top steps, a block will lower behind you, preventing exit. A trap will also open at the top of the stairs. On Ultra-Violence on above, it contains another mancubus. Lure it out and give it some super shotgun blasts at point-blank range before it can fire. Turn the corner and deal with an arachnotron (Hey, not too rough and below) or a mancubus (Hurt me plenty and above).

Grab the yellow key and leave this building.

Go to the building in the south. The last set of enemies you face comprises a baron of Hell and some former humans. Once again, plasma should make short work of this group of monsters.

Find the yellow door in the south of the building and open it. Flip the switch behind it to exit the level.

As described in secret #3, walking through that passage lowers (Linedef 1151; Type 37 - W1 Floor Lower to Lowest Floor (changes texture), Tag 27) a room in the south (sector 245) and a wall outside (sector 249). Another wall (sector 250) is supposed to lower, but since it's floor has the same height as the adjacent sectors, it stays shut, never releasing the chaingunner (thing 44) and the Hell knight (thing 43). So, 100% of the kills cannot be reached unless using the idclip cheat.

The switch that opens the way into the town area after the second teleport can be triggered from below before either of the two platforms are raised.

* The vertex count without the effect of node building is 1630.