MAP18: Base of Thorn (Requiem)

MAP18: Base of Thorn is the eighteenth map of Requiem. It was designed by Eric Sambach, and uses the music track "Dry Rot" by Mark Klem.

Hint: When you get the red key, it's best to run really fast to the exit. 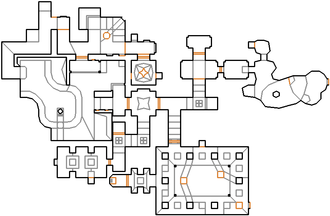 Map of Base of Thorn
Letters in italics refer to marked spots on the map. Sector numbers in boldface are secrets which count toward the end-of-level tally.

Kill the zombies and head through the door ahead. Follow the next hallway until you find a room with two doors. Take the right door, and at the first fork go straight. You will find the yellow door, but approaching it drops you in with several shotgun guys and imps. Kill them and open the door to the right. Drop into the pit there. From there, kill the monsters and climb up the rocks to the switch. After flipping it, head back to find a Hell knight (or baron of Hell on Ultra-Violence or higher) guarding the blue keycard. Grab it and teleport back to the base. You will be back at the junction of two doors, where you can now take the blue door on the left. Behind it, use the lift to go down to an open field with a nukage pool straight ahead, and a lift along with a door on the right. You cannot use the lift now, so grab the nearby radiation suit and go through the nukage to the west until you drop into a pit. Take out the monsters here and hit the switch at the end to ride a lift upwards. You will find the same door you could not access earlier with some ammo behind it, as well as a plasma gun in the middle of some stairs. Grabbing it triggers a closet of Hell knights. Approaching the door to the east triggers several zombies to ambush you from two sides. Opening the door reveals an arch-vile and a yellow keycard. Grabbing it opens a teleporter to your left, so enter it. You will be back at the junction again, so take the right door and go south to the yellow door. Inside is a bleak area with pillars and a caged room with arachnotrons and the red keycard. Go to the southeast corner of this room to find a switch which lowers the column nearest to it. Enter the teleporter to reach the keycard, but watch out for the zombies that appear from lowering pillars when you grab it. Enter the red door to the west of there to find the exit.

The back side of linedef 950 (the wall you push on to access secret #5) is untextured. As the ceiling of sector 200 is 32 units higher than the sector on the linedef's front side (sector 156,) if you stand on the lift and face outward as it rises, a Hall of Mirrors effect can briefly be seen before you are lowered again.