MAP18: Bizarro is the nineteenth map of Hacx. It was designed by Anthony Czerwonka (Adelusion). 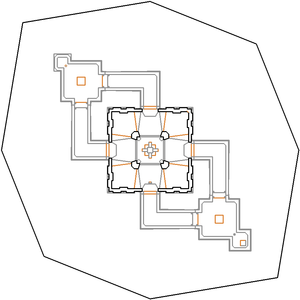 Map of Bizarro
Letters in italics refer to marked spots on the map. Sector, thing, and linedef numbers in boldface are secrets which count toward the end-of-level tally.

Collect the cryogun in front of you, which will lower the surrounding walls to reveal some androids (or terminatrixes on "Let's rip them apart!" (LRTA) skill level or higher), then press the button by the south door to open the corners and reveal two or three monstructs. Go to the north-east corner of the room to find an enk blind and flip the switch here to open the doors, destroy two waiting mechamaniacs then go through the north or west doorways (which have a photon 'zooka and stick behind them respectively) and follow the path round to find a terminatrix (or majong 7 on LRTA or higher) guarding a pole, which you can press to lower it and find the blue Z-key - taking the key is not required, simply stepping over the pole is sufficient to open the exit. Go back to the center room and pass through the south or east doorways (collecting a photon 'zooka or nuker as you do so), then follow the path to a blue exit teleporter.

* The vertex count without the effect of node building is 530.