MAP18: Broken City Resort is the eighteenth map of Doom 2 Unleashed. It was designed by Walter Confalonieri (daimon) and uses a custom music track.

When using the music WAD included with this megawad, this level instead uses the music track "Glory" by Paul Corfiatis. 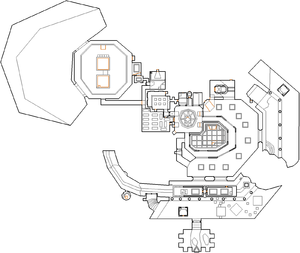 Map of Broken City Resort
Letters in italics refer to marked spots on the map. Sector, thing, and linedef numbers in boldface are secrets which count toward the end-of-level tally.

You start in a confined space with four super shotguns and a backpack. Take these items then press the skull switch in front of you - the floor will rise and you will find yourself surrounded by chaingunners, so run forward into a doorway and turn left to see a rocket launcher in front of a door locked with the yellow key. Face north and you will see a red switch in the wall behind an impaled corpse - shoot this switch then return to the starting room, where a platform has lowered in the south-west corner allowing you to reach the red keycard sitting on it. Approaching the key will lower two lifts on the east side of the room, bringing some chaingunners down to ground level if you have not killed them already.

Step through the west door (requiring the red key) to see some boxes of rockets but approach them with caution - there are fifteen revenants in front of you, as well as an arachnotron waiting to ambush you from the left when you collect the ammo. Once you have killed all the monsters, take the plasma gun sitting in the north-east corner of the room then go through the north-west doorway and follow the passage to another room, where three mancubi and a pain elemental are guarding a switch in a small alcove. Press the switch and step round the hole in the floor that has opened behind you, then return to the starting room and go through the south doorway.

Follow the passage past an opening on the right, then go round the corner to see an open door on the left - through it you can see a pit with a cyberdemon and 18 barons of Hell, which will start attacking as soon as you come into view. Avoid firing your weapons and wait for the cyberdemon to fire rockets, as it will hit the barons and cause infighting. Once the cyberdemon or the barons have been killed, drop into the pit and use the invulnerability powerup to finish off any survivors before collecting the yellow skull key that the cyberdemon was guarding.

After taking the yellow key, flip the switch next to it to lower a lift that you can use to get out of the pit then return to where you found the rocket launcher and open the door requiring the yellow key. There are 18 chaingunners waiting in the next room as well as five mancubi on a raised ledge - use the two alcoves just behind the door as cover. Once the room is cleared, enter it and turn left then press the switch in front of you. Return to the starting room and go through the south doorway again, but this time go through the opening on your right and follow the passage through an open door to an area with arachnotrons.

Follow the area east and north until you reach an opening in the north wall and go through it, then walk round the tech structure (which contains any barons that teleported out of the yellow key area) to find a switch. Flip the switch then leave the room and turn right to see that a bridge has risen over a nukage pit, letting you reach the switch on the other side. Flip this switch then return to the starting room where the north-west platform has lowered, letting you take the blue skull key that was hidden behind it. With the blue key, go through the north doorway and open the exit door in front of you, kill the pain elemental and press the switch it was guarding to finish the level.

After pressing the switch that opens the yellow key room, turn round to see that a hole has opened in the floor. Drop into the hole and follow the path past some chaingunners to enter a room with two large columns which will lower to reveal a cyberdemon and a spiderdemon. Get these monsters to infight with each other and kill the victor, take the supercharge hidden between the platforms then climb the steps by the cyberdemon's platform so you can reach a skull switch next to the spiderdemon. Press this switch to open a door to the south and reveal an arch-vile, then go through the door and pass ten chaingunners to a lift leading back to the main level. Watch out for another arch-vile that has been released near the red key door.

* The vertex count without the effect of node building is 2326.