MAP18: Buckets of Blood is the eighteenth map of Plutonia 2. It was designed by Adolf Vojta (Gusta), and uses the music track "Silicone Dust" by James Paddock. The par time defined in MAPINFO is 2:30. 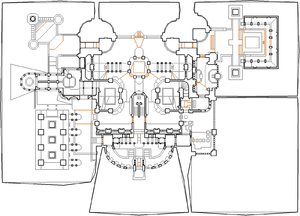 Map of Buckets of Blood
Letters in italics refer to marked spots on the map. Sector, thing, and linedef numbers in boldface are secrets which count toward the end-of-level tally.

Turn around at the start and head into the blood killing former humans. The bars ahead will open, and you will see the super shotgun and the yellow key. Kill the enemies here, and to get the yellow key you need to press two switches, one after the other. Underneath the wooden beams, head west and press the lion switch there, then head east for the second lion switch (look out for revenants). The yellow key will lower, so take it.

You should now reach the central portion of the map, which you saw from the starting point. There are several paths to take, going past yellow bars. Whichever path you choose, get rid of all monsters along the way. The central area has an elevated cross in the middle, with switches on the sides that you need to remember for later. For now, go into the blood north of the cross, where you will see the exit. Grab the plasma gun, and two compartments to the sides will open up revealing revenants, while mancubi teleport onto the cross. Both compartments have switches in them that you must press so you can retrieve two keys.

Press the switch on the left, then go upstairs and run west from the cross. The northwestern section no longer has bars blocking it, so enter this area. The red skull key is on the northwest wall here, grabbing it will be difficult as monsters teleport into the area as you approach.

Press the switch on the right then head southeast from the cross, climbing a curved staircase up and then climbing the next staircase on your left. This path is open, so move through killing the enemies, looking out for the arch-vile that teleports to the right and the cacodemons rising up from below. Open the door to appear in a large area where the blue key is on top of a wall. Kill the enemies found here, including the arch-vile that teleports behind you when you descend the steps, then press the lion switch in front of the blue key. Two lifts to the north and south while lower, get on one of them and rise up. Maneuver around until you can jump to the blue key and jump to it.

* The vertex count without the effect of node building is 3665.