MAP18: By Silent Wings is the eighteenth map of 2048 Unleashed. It was designed by Jeff King (Egregor) and uses the music track "You Suck!" from Rise of the Triad, composed by Lee Jackson. 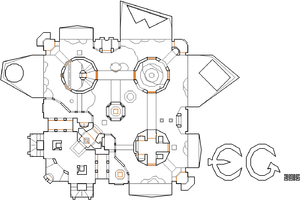 Map of By Silent Wings
Letters in italics refer to marked spots on the map. Sector, thing, and linedef numbers in boldface are secrets which count toward the end-of-level tally.

Go through the door on your right and head south until you walk over two square steps, then look for a door on your left and open it to confront shotgun guys and demons. There is a switch in the north-west corner which will lower a lift next to it - approach the switch to open two alcoves containing a Hell knight and a revenant (or two revenants on Hurt Me Plenty (HMP) skill level or higher), then ride the lift up and head north across the bridge to another door at the opposite end. Open the door and kill the imps waiting behind it, then step through and pull the chain switch on your right. Go back to the bridge to find that the square steps you walked over earlier have risen - run across them to a ledge with the red skull key as well as armor and ammo.

Drop off the ledge and head south, going round the gray tower you entered earlier until you reach the center of the level which has a marble brick tower guarded by an arachnotron. South-west of this structure is a red key door - open it to confront a demon as well as (depending on skill level) imps or knights and revenants or an arch-vile. Kill all the monsters then enter the room (the door will close behind you) and head forward to a lift which will take you down to a chamber with a sludge pool. Kill the imps, demons and one or two knights here then enter the knights' cage to find a chain switch that will lower a lift by the north wall. Ride this lift up and kill any zombies waiting at the top then turn right to find a switch between two tan pillars.

Flipping the switch will lower a lift in the east wall of the sludge room, but a knight and a revenant (or two revenants on HMP or higher) will have been released from alcoves when you ride the first lift back down. After riding the second lift up, kill the chaingunners and shotgun guys waiting at the top then step into the teleporter they were guarding - you will find yourself in front of a switch that will open the marble brick tower ahead revealing revenants, lost souls, cacodemons and (on HMP or higher) a pain elemental. Enter the tower and step on the white teleporter pad to finish the level.

A megaarmor is sitting on the ground inside the north-east tower, while a supercharge can be found in the south-west window of the tower near the chain switch.

Super shotguns can be found at the tops of lifts in the south-east and north-west corners of the level.

A rocket launcher and eight rockets can be found on a step next to the marble brick tower.