MAP18: Crush Depth is the eighteenth map of Valiant. It was designed by Paul DeBruyne (skillsaw) and uses the music track "Prototype (Extended)" from Jenesis, composed by James Paddock (Jimmy) and Stuart Rynn (stewboy). The par time is 8:30. 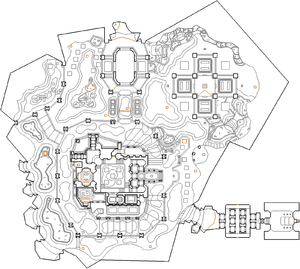 Map of Crush Depth
Letters in italics refer to marked spots on the map. Sector, thing, and linedef numbers in boldface are secrets which count toward the end-of-level tally.

Take the shotgun in front of you and turn right - you will see a tall room with four platforms that have revenants on them, which can be crushed by shooting four target switches that are hidden around the room. Follow the staircases up to the top floor then follow a trail of health bonuses west into an antechamber, where two shotgun guys are guarding a switch recessed into the west wall. Flip the switch then go back to the starting room and turn left to see that a wall has lowered to reveal zombies and an arachnorb guarding two tunnels with crushers. Time your run through either tunnel to get on to a walkway surrounding the center building, but do not stand still as there are many enemies waiting here. Fight your way to the east side of the walkway to find a switch guarded by a few enemies and flip it - the wall behind you will lower and allow you to get the red keycard, but will also release two arch-viles.

Go back to the starting room and open the red key door on the north side, activate the lift behind it and go up to a ledge with super imps and zombies guarding another switch. Flip the switch and you will see some metal bars lower in front of you; as you pass these bars and head north towards a second set of bars, imps and one or two chaingunners (along with revenants on Hurt Me Plenty skill level or higher) will rise from the platforms on either side of the bridge. Shoot the target switch hidden between the west platforms to lower the second set of bars, then go past them to a junction and head left (encountering two arachnotrons) or right (encountering imps and a super mancubus) to get to the north side of the tan building in front of you. Continue north to a switch guarded by a revenant and flip it; this will open the walls of the tan building to reveal the blue keycard under a large crusher - many demons and pyro knights will teleport to the bridge you just crossed, but you can use the crusher to damage or kill them.

Backtrack to the walkway around the central building and go to the north-east corner to find two more switches, then flip the north switch (requiring the blue key) to open a teleporter to your right; this teleporter will send you to the large cross-shaped cage you can see in the distance. Arm yourself then approach the metal block with the yellow keycard on it, which will trigger an ambush by many imps, chaingunners, pyro knights, mancubi, arachnotrons and zombiemen that appear inside and outside the cage. Once everything is dead, shoot the four target switches visible through the sides of the cage to lower the center block, allowing you to get the yellow key and enter a teleporter leading back to the locked switches. Press the east switch this time then run south down some square platforms that lower in front of you, collecting a radiation shielding suit on the way, until you land on some nukage steps with various monster corpses.

Head down the steps towards two crushers; as you reach the crushers four to six arch-viles will appear behind you and start resurrecting the dead monsters, so step past the crushers and use them to give you cover. You will find yourself in a room with more crushers - continue east until you reach a chamber with a plasma gun, press the skull switch opposite it then return to the main crusher room to find that the north and south walls have opened to reveal two more skull switches. After pressing these, return to the area where the arch-viles teleported in to see that part of the south wall has opened to reveal one more switch; flip it, then return to the plasma gun chamber and pass the barrier that has opened here to reach a red portal - the portal will send you into a death exit that will end the level automatically.

If you walk off the west side of the walkway surrounding the center building, you will land in a pit with a BFG9000, an energy cell pack, a medikit and a partial invisibility. Taking the items will seal you inside the pit and release two spiderdemons along with many suicide bombers and imps into it; to escape you will need to pull a lever hidden inside the column in the south-east corner.

Drop into the nukage around the cross-shaped cage in the north-east corner of the map, then head north-east until you reach some steps leading up to a super shotgun. If you continue west you will reach a supercharge guarded by imps and arachnotrons.

* The vertex count without the effect of node building is 7816.