MAP18: Cyclone Utilities (Remember Your Birthday) is the eighteenth level of the first episode of Back to Saturn X. It was designed by Simon Judd (SlayeR) and Sarah Mancuso (esselfortium); the former also composed the level's music track, "Forget Your Name". The par time is 4:30. In the official add-on version, this level's name is The Annex. 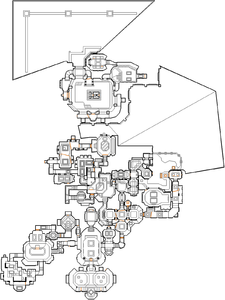 Map of Cyclone Utilities (Remember Your Birthday)
Letters in italics refer to marked spots on the map. Sector, thing, and linedef numbers in boldface are secrets which count toward the end-of-level tally.

The keys in this level can be obtained in any order. Doors with colored lights will indicate that the corresponding key is in that direction.

As the level starts you will see a chaingun in front of you on I'm Too Young To Die and Hey Not Too Rough skill levels, or two zombiemen on Hurt Me Plenty (HMP) or higher. Open the door and turn right then right again to enter a room with demons and shotgun guys, then continue through the west doorway to a larger room with many enemies, including a mancubus on HMP or higher. Go to the door in the south-west corner and activate the lift opposite it to get up to a ledge with a revenant, then head north until you pass one or two chaingunners and reach a room with an armor protected by imps (plus cacodemons and revenants on HMP or higher). Grab a radiation shielding suit by the west door and head through it to enter a lava-flooded room with a plasma gun, which is guarded by numerous enemies including imps and an arachnotron, then enter the tunnel in the south-west corner to find another radiation suit that you may need. Continue south and east past some chaingunners into another room, which holds an arch-vile on HMP or higher, then flip the switch on the east wall to open a door to the south - this door leads to the red keycard.

From the red key, head north to find an open door leading back to the room below (you can drop down to a crate holding a berserk pack from here), but watch out for a group of imps, cacodemons, chaingunners and Hell knights that teleport in. Proceed south down some steps to a dark hallway that leads to a room with three "LOCK" panels - you will need all three keys to open these panels and reach the teleporter to the exit area. Head to the steps on the east side of the room, past a waiting mancubus, then go up to the top and follow the path past some imps and chaingunners to a door with yellow lights. Go through the door and push past a couple of shotgun guys (plus a cacodemon on HMP or higher) to drop down a hole, which leads down to a room with a rocket launcher guarded by mancubi and other opponents, then go through the doorway on the west side of the room and press an arrow button on your right to lower a lift (it will have another mancubus on it on HMP or higher). Ride the lift up and head past one or two shotgun guys to a room crowded with enemies, including an arachnotron in an alcove, then activate the lift in the middle of the room and prepare to kill two demons (plus to revenants on HMP or higher) that rise from the floor ahead.

Open the door ahead and slay any imps waiting behind it, then follow the corridor east (watching out for one to three revenants that are released behind you) to enter an octagonal chamber with a mancubus. Flip the switch on the north wall and kill the imps and zombies that are revealed around you, then step on the lift in the east alcove followed by a second lift in front of you to get back to the rocket launcher room, where the north door has opened to reveal chaingunners and imps (plus an arch-vile and two cacodemons on HMP or higher). Step on the teleporter at the back of the chamber to enter a room with zombies, imps and a mancubus, then head up the steps on the east side of the room (which causes cacodemons to rise from the water pools) and follow the ledge round to a switch that will open four compartments with revenants and imps. Drop down the hole that has been revealed on the north side of the room to see the yellow keycard in front of you.

Taking the key will allow various enemies to teleport into the room, including another arch-vile on HMP or higher; it will also lower the wall in front of the hole that first brought you into this room, revealing a chamber with chaingunners, imps and a knight. Flip the switch on the north side of this chamber to lower a lift behind you, which leads back up to the room with the "LOCK" panels.

Back in the room with the "LOCK" panels, go up the steps on the east side of the room to a door with blue lights and kill any enemies waiting behind it, including an arachnotron at the top of the steps. Follow the corridor north to a door, which will open as you approach to reveal one or two revenants that teleport behind you, then go through and flip the switch on the east wall - this will lower a pillar visible through the window holding the blue keycard. Drop out of the window to get the key, but use caution as various enemies are waiting outside including a baron of Hell. Go through the doorway in the north-west corner and follow the hallway back to the starting point, then return to the room with the "LOCK" panels and press all of them to reveal three switches that will open some colored bars blocking a teleporter. Watch out for revenants and demons (plus an arch-vile on Ultra-Violence and Nightmare) that teleport in as you flip the switches.

Step into the teleporter and dispose of some waiting enemies, then go up the steps to enter a large hall with a lava pit that is overlooked by many monsters including chaingunners, revenants and mancubi. Climb up the steps on the south side of the pit then turn round to see a lift behind you, ride it up then walk west towards a green "LOCK" panel on the wall ahead - watch out for zombies that are released to your left as well as a couple of revenants behind you. Pressing the panel will lower the wall west of the pit and reveal one to three arch-viles that will teleport to the upper levels; kill them then activate the lift that was hidden behind the wall and ride it up, then follow the path north and east until you can make a running jump to the structure in the middle of the lava. Carefully step round to the west side of the structure and go inside it to flip a switch that will lower the surrounding walls reveal a chaingunner (plus a revenant to your left on HMP or higher), then follow the narrow ledge round to the east side of the structure to find the exit teleporter.

The storage area in the south-west corner of the map holds a plasma gun, as well as a megaarmor on a crate.

* The vertex count without the effect of node building is 5240.