MAP18: Daemon Campus is the eighteenth map of the Newdoom Community Project. It was designed by Dennis Meuwissen (Exl). 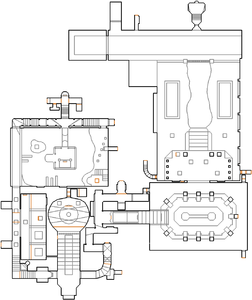 Map of Daemon Campus
Letters in italics refer to marked spots on the map. Sector, thing, and linedef numbers in boldface are secrets which count toward the end-of-level tally.

Head straight up the stairs, grabbing the box of shells and the shotgun, and an alcove will open revealing a shotgun guy and a teleporter. Take the teleporter to go back to the start, and a passage to the west will open. Go through the hallway until demons ambush you from the front and back. The southern of the two demon closets holds a switch which opens up the rest of the hallway. You will see a large open area, keep going down the hall until you enter the open space. Go to the teleporter in the south east to be teleported in front of a switch. Press this and the door in the hallway that you could not open earlier will now be open, releasing a trio of barons of Hell. Press the switch here to lower the left. Shoot the western switch behind the bars and go right to get the red skull key. Now go back to hallway going southward and an opening will be on your left. Press the switch in this new area to lower the southernmost compartment. Enter this one and go to the northernmost compartment which will start moving up and down. Enter this one and the compartment just below it will open revealing a teleporter. Go through this teleporter to go back to the starting point, with the eastern passage now open.

Go through this hall pressing the switch to reveal a compartment where the lost souls ambushed you from the stair curve. The switch here should open the door. In the next area, do not bother pressing the switch on the first path to the right because it will open up a compartment with lost souls behind you. Take the other path to a switch (watching out for an ambush behind you) to open the first path which reveals and arachnotron and some lost souls. Drop down here and head up the stairs into a very large room. When you make a sound here enemies start to teleport so beware. You need to find the eastern column and press the switch there, this opens two compartments to your north and south. One has a teleporter leading you to the central structure in this room where you can grab a chainsaw. The other has a switch which opens up the northern wall in the room. This leads to the outer entrance of the campus. Go out here and turn left and find the door on the wall, go through and press the switch to lower the bars. There will be a room full of imps directly in front that is open as well. Get a plasma gun here, and you can leave by going west into a small hall by pressing the switch next to a lift. Be wary of the revenants on the street though.