MAP18: Dour Tower is the eighteenth map of 1000 Lines 2 - Community Project. It was designed by James Paddock (Jimmy) and uses a MIDI rendition of "Tower of Power" from Croc: Legend of the Gobbos, sequenced by James Paddock, as its music track. 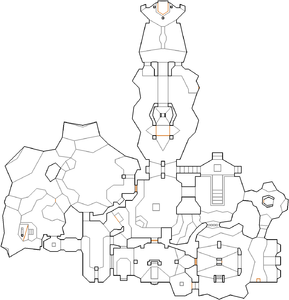 Map of Dour Tower
Letters in italics refer to marked spots on the map. Sector, thing, and linedef numbers in boldface are secrets which count toward the end-of-level tally.

Kill the imps, zombiemen and shotgun guys in the starting room then open the north door to confront some demons waiting outside on a walkway. Drop into the water below and push past some imps (and spectres on Hurt Me Plenty (HMP) skill level or higher) to the doorway in the north-east corner, then go through and head east around the elevated staircase in the next area which is protected by chaingunners and a cacodemon. Continue east to a snow cavern and kill any shotgun guys here, then go round to the east side of the center column to find a revenant guarding a gargoyle switch that will lower the south waterfall. Head past the Hell knight waiting behind the waterfall then push through some demons to a teleporter, which will put you on the ledge on your left where (on HMP or higher) some revenants are guarding a super shotgun.

Run west to land on a snowy ledge with a chaingun and some imps, then head round to the south-west corner of this ledge and walk through the doorway here. The column in front of you will open to reveal an arch-vile - kill it and take the blue skull key sitting behind it.

Drop into the starting room and go through the north door again, then follow the walkway west and north to a blue key door. Open the door and kill any demons waiting behind it, then walk west into the water before heading south past one or two mancubi to another doorway. Go through then head east past some spectres to a lift and ride it up to the floor above, then head south and west to get on a U-shaped walkway with some imps. Enter the tunnel on the west side of this walkway and follow it to an outdoor area with a revenant, spectre and mancubus (or multiple monsters on HMP or higher), then press the gargoyle switch in the north-east corner next to the water pool - this will raise some steps up to the gallows in the south-west corner, letting you take the red skull key sitting there.

Kill the arch-vile that is released behind you then return to the starting room and open the east door, which is locked with the red key, to reach a wooden terrace. Press the skull switch on the east side of the center column then head through a set of bars that open to the south to find yourself back on the ledge where you found the chaingun; if you go to the north-west corner of this ledge you will see that some more bars have opened, allowing you to run north and land on the elevated staircase you passed earlier. Go up the steps and kill a revenant waiting at the top, then head west up some more steps to reach a ledge with an armor before walking north to drop into a pool of water.

Press the gold lift in front of you to lower it, kill a knight then ride the lift up and head north (passing two pain elementals on Ultra-Violence and Nightmare) over a bridge towards some lost souls. Ahead of you is a slime pit, which is inescapable if you fall into it; walk south-east to a ledge with some imps and press the skull button here to raise a bridge over the pit so you can reach the other side, where three barons of Hell are guarding a patch of sky that you can step on to finish the level.