MAP18: Elements is the eighteenth map of Whispers of Satan. It was designed by Paul Corfiatis, who also wrote the music track for this level, "Frozen Mysteries".

Map of Elements
Letters in italics refer to marked spots on the map. Sector, thing, and linedef numbers in boldface are secrets which count toward the end-of-level tally.

Press the switch at the beginning and look out for shotgun guys and lost souls as you descend. Shoot the stained glass to the north and enter the teleporter. Cross over to the building you see and enter it. Kill the Hell knight in front, and kill the imps as you ascend the steps. Press the switch at the top to open several rooms of imps and then exit the building. Arrows will point you to the red skull key, so pick it up and then leave this area, looking out for the arch-vile at the teleporter. Back at the starting point, take the red door. Kill the enemies in this hallway and then enter the next room where you will find the blue skull key. To get it, go to the end of this room and press the four switches to lower the side barriers that have arachnotrons and four switches on them, then press those four switches. They will create a staircase to reach the blue key, and it will lower, but you will also have to deal with revenants. Return to the hub and take the blue door on the opposite side. You will find the yellow key in this room and three other paths. The one to the right is blocked and the one straight ahead requires the yellow key, so take the one on the left. In the next room, kill the chaingunners and press the switch, watching out for the imps that appear. Then head back into the yellow key room to find that the other path is now open. Repeat the same procedure with this room as you did with the previous room, and you will be able to get the key. Arrows point to the yellow door, so open it and repeat the same procedure yet again in this next room. Return to the hub and you will notice that a bridge is made southward to the exit door. Enter it and flip the switch to reveal an outdoor area with imps abound. Flip the switch in the center of this area to reveal four side rooms with mancubi and switches in them. Flip these four switches to open the way to the exit, and get rid of the cyberdemon guarding it. 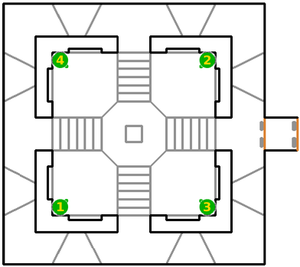 * The vertex count without the effect of node building is 4283.