MAP18: Excess Meat is the eighteenth map of Hell Revealed II. It was designed by Jonas Feragen and uses a music track by Sam Woodman (Metabolist). 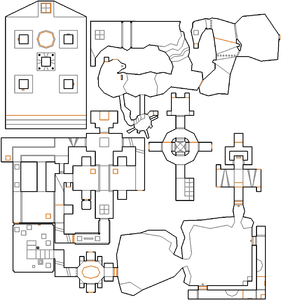 Map of Excess Meat
Letters in italics refer to marked spots on the map. Sector, thing, and linedef numbers in boldface are secrets which count toward the end-of-level tally.

Follow the steps down as you gather supplies, then drop into the water. Go around to the other side of the moat as quickly as you can to get an invulnerability and a rocket launcher, which you can use against the monsters that quickly show up. After killing them, hit both skull switches to open the way north to a room with imps, medikits, and a chaingun. This area will function as a hub, with four teleporters leading to four different sections of the level, so remember it every time you reappear here. For now, only the southwestern teleporter is available, so take it. The teleporter takes you to a metal bridge span with imps in front and mancubi and arachnotrons to the sides. Cross the bridge and take the path going right. Flip the switch then return, going across the bridge to where you teleported for another path. Kill the shotgun guys here, looking out for a trap midway, and flip the switch at the end of the path to open the nearby door. Kill the enemies here and cross the next bridge span all the way to the next switch. After pressing it, go back up and then east, through the newly opened hall, to appear on the other side of the first bridge again. This time, another path north is revealed. Inside are revenants and a hole which functions as a teleporter. Take it back to the hub.

Now the southeastern teleporter is open, so take it. You will need to be prepared, as several cacodemons, Hell knights, and mancubi are in this area. This watery area has two sections, the one you are on now has several key doors which you cannot go through yet, so head into the other one (with the mancubi) and open the big door here. Kill the enemies inside, including the ones behind bars (arch-viles and chaingunners). Press two switches here to open the bars, but also reveal four barons of Hell as well as block off the entrance. Note that falling down there means a slow death. Head through the hallway where the arch-viles were and follow it to a room with crates, shotgun guys, and spectres. The switch in this room raises the way to the entrance so you can leave this area, but do not leave without getting the blue skull key in this room. You will need to clamber up a few crates to reach it. Once you get it, leave and return to the watery area, going through the blue door to the north. When you grab the berserk pack here, the floor lowers and you will be trapped by spectres. Kill them. You need to head back up though, and if you are on one of the sides, press a gargoyle switch to reveal a teleporter leading back to the hall. Flipping the switch at the end reveals two side paths, both of which lead to a teleporter back to the hub.

Enter the northeastern teleporter and be prepared to face off against Hell knights and imps. Enter the cavern and kill the arch-vile next to the water, then jump in. Kill the spectres in the tunnel and the cacodemons at the waterfalls, then climb the rocks to reach the other side where there are more imps. Flip both switches here, opening up the door at the other end of the cave and revealing the yellow skull key and a nearby teleporter. Through the new door, kill the revenants and arch-viles, then kill the cacodemons. You might be trapped inside, so to get out, look towards the lava-filled area where the cacodemons were to spot a switch. Shooting it opens both sets of bars, so keep going, kill the chaingunners, and teleport back to the hub. One more teleporter remains: the northwestern one, take it to a large open field with imps in front, as well as cyberdemons hiding behind green faceted structures. Kill everything here, and press four switches near the structures. Doing so raises the lava pool in the center so you can get the red skull key. Getting it lowers the teleporter with barons on it; take it back to the hub. Now go back through the southeastern teleporter to the watery area. There might be an arch-vile here, so kill him, and take either the red door or the yellow door. Either one takes you to a hall with imps, and some barons guard the exit teleporter. A switch is at the end of both halls, flip it, and you will lower an exit barrier on the other side (this is why you need both yellow and red keys). Look out for a cyberdemon behind you when you flip one of the switches, then go to the other hall and exit.