MAP18: Fortress: Stores is a level in Strife. It uses the music track "Slide". It is a strictly optional level mentioned to the player by Quincy as the location of a fresh shipment of the templars' favorite weapon, the Mauler. A large amount of gold can also be found here in an out-of-the-way stash. 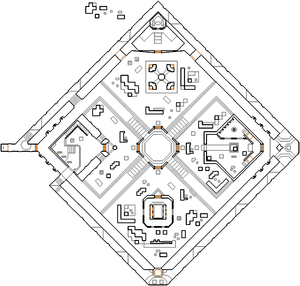 Map of Fortress: Stores
Letters in italics refer to marked spots on the map. Sector, thing, and linedef numbers in boldface are secrets.

At the beginning, start to circle the area by using the outermost passages of the diamond-shaped level. When you have made nearly a full circle, you will find a staircase and a switch that allows you to access the western section. Kill the orange acolyte in the area to receive the Mauler key.

Backtrack to the southern end of the level and take the lift down. In the middle of the southern section, there is a building that can be accessed by the Mauler key. When you hit the switch there, you will open the central hub of the level. The routes to the gold stash and the Mauler room will open as well.

The Maulers are located in the eastern section. If you enter the area from the eastern end of the level, simply turn right after crossing the green line and go down the lift to find the weapons. When entering the section from the hub, find a conveyor belt and go to the room where there is a stack of crates on the belt. Go up a lift, walk past the green line and take another lift down.

To get the gold, enter the northern section. Go all the way to its northern end and open the door to find 400 gold coins in a small room.

In the northern section, there is a rectangular area with five structures. The four outermost ones hide rooms that can be accessed by pressing the walls with six vents in them. The northeastern room is empty, but the other three contain a surgery kit (SW) and two shadow armors (NW and SE).

Most of the sectors making up the outer passageway around the level as well as a few others are open, due either to sloppy vertex placement or a bug in DoomEd that could fail to split lines when it was intended. This can cause problems for hardware-accelerated renderers. In addition, a set of crates copied and pasted from another part of the level were left constructed in the void to the upper left, some of which form open sectors on their outer boundaries.

* The vertex count without the effect of node building is 2029.