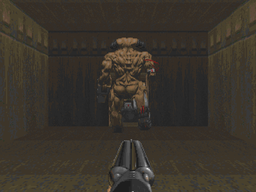 Close encounter with a Cybie

MAP18: Hard Attack, designed by Yonatan Donner, is the eighteenth map of Hell Revealed. It uses the music track "I Choose the Stairs" from Rise of the Triad.

Hunted (Plutonia Experiment level 11) was frightening, definitely. But this level can make you fear even more. Where are those laughing archviles? Where are all those enemies teleporting? What are those metallic steps? There are traps everywhere you go, and some very unique areas. See if you can chase that cyberdemon to his death, or yours? This dark base is occupied with so many enemies that you might encounter problems when trying to save the game in the first room. If that happens, just save after the first room. 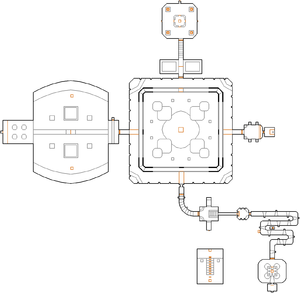 Map of Hard Attack
Letters in italics refer to marked spots on the map. Sector, thing, and linedef numbers in boldface are secrets which count toward the end-of-level tally.

When the cyberdemon teleports away, head into the first room. The super shotgun can be grabbed by using the lift just before the next door, but chaingunners will surround you when you pick it up. Open the next door and follow the winding hallway of monsters until you reach the next room with a shotgun and a lift. When you ride the lift down be wary of the barons of Hell, then enter the next room with cacodemons. Attempting to open the next door reveals two arch-viles and some imps to your sides, the southern closet holds the switch which opens the door. Take the stairs down and you will eventually find the big room.

The big room has a long square walkway with revenants on it, but you cannot access it right now. Drop down, and take either path, killing the barons of Hell, Hell knights, and cacodemons in the way. Head through the door with the gray skull markings. As you proceed, there are imps in cages, but hordes of revenants will appear just before you descend the stairs to the next door. The next room has several mancubi and a megasphere in the middle. A cyberdemon will teleport around the corner teleports in the room, and you can telefrag the monster if you are clever. When you pick up the megasphere, a switch to the north is revealed, so press it, then press the one on the east wall, then the west wall. Doing so lowers the barriers so you can telefrag the cyberdemon.

Picking up the megasphere also raises a bridge in the main walkway, and to get to this walkway, go out the door with the gray skull markings and use the lift. The problem here is that revenants and other monsters will likely block off your access to the lift, so you should kill them until the monsters stop appearing on the lift, then ride back up. Lowering the lift also reveals the central area. The cyberdemon at the beginning teleported here, and there are also arachnotrons and mancubi present as well. Be very careful if you wish to pick up the BFG9000 in the middle as arch-viles will teleport to the eight caged pillars in this open room. When you finally manage to get on the walkway, take the bridge west to the next area.

This next large area has a single walkway, but crossing it halfway reveals two spider masterminds. You also have to contend with imps, cacodemons, and mancubi on the far ledges, spectres on the bridge, as well as barons of Hell on the smaller pillars. Grab the soul sphere on the far end, and you will raise a bridge to the east on the main walkway, but also release a few more monsters on the walkway too. Crossing the bridge to the east, open the door and in this final room are some caged arch-viles and some arachnotrons. Killing a caged arch-vile causes another one to teleport into the cage, so kill that one too. Approaching the exit door causes you to teleport back onto the bridge, with an arch-vile directly behind, so quickly kill him. Now you can open the exit door, kill the final arch-vile and exit the level.

* The vertex count without the effect of node building is 1717.